Each year, the program sponsors lectures by leading scholars, officials and lawyers who not only study but shape public law as well as short courses. The program draws on a wide range of scholarly perspectives—legal, political, historical, philosophical and economic—that bear on the study and practice of public law in the United States and abroad. 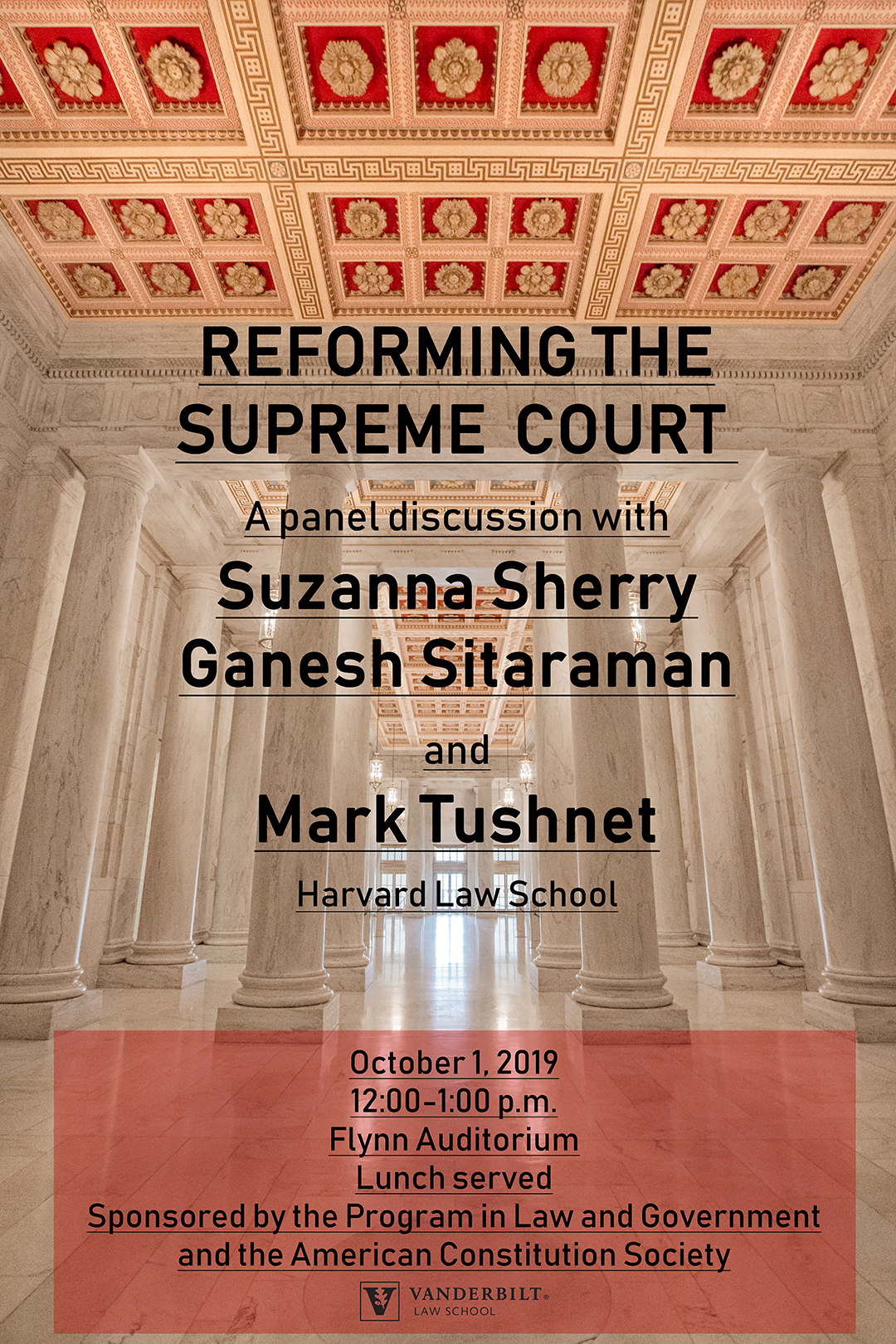 Sponsored by the Program in Law & Government and the American Constitution Society National. Please join Vanderbilt Law School Professors Ganesh Sitaraman, Suzanna Sherry and Harvard Law Professor Mark Tushnet as they discuss ways to reform the Supreme Court. The professors will discuss the merits of different methods of regulating the Supreme Court including: term limits, rotating justices and eliminating permanent seats and only having seats by designation.

Investigations and Prosecutions in the Age of Trump: A Conversation with Hon. Paul J. Fishman

The Energy, Environment and Land Use Program, the Criminal Justice Program, and the Program in Law and Government hosted an engaging conversation between former U.S. Attorney and frequent media commentator Paul Fishman and Professor Michael P. Vandenbergh of Vanderbilt Law School. Fishman discussed the high-profile investigations and prosecutions involving the Trump administration with Professor Vandenbergh and provided insights into the status of the Mueller report, other investigations, criminal procedure, and the rule of law.

A View From the House, a conversation with Luke Messer '94 (R-IN)

The Kneel-In Movement: Race, Religion, and the Second Reconstruction

A Conversation with Makan Delrahim, Assistant Attorney General of the Department of Justice’s Antitrust Division

Makan Delrahim discussed his work as assistant attorney general in the Antitrust Division of the U.S. Department of Justice in a conversation moderated by Professor Rebecca Haw Allensworth.

Government in the Age of Healthcare.gov

The Program on Law and Government welcomed Erie Meyer to talk on the topic of "Government in the Age of Healthcare.gov" and share will-be war stories about technology in government and strategies for transformation.

Mark Zuckerberg's War on Free Will: How Big Tech Threatens the Individual

Franklin Foer is a national correspondent for The Atlantic, a New America Foundation Fellow, former editor of The New Republic, and author of World Without Mind. Foer will be discussing "Mark Zuckerberg's War on Free Will: How Big Tech Threatens the Individual" based on his latest book.

Co-sponsored by the Vanderbilt Law School Program in Law and Government, American Constitution Society, and Federalist Society, we welcomed Congressman Ted Deutch to Vanderbilt Law School. Professor Brian Fitzpatrick spoke with Representative Deutch about the state of politics in Washington, as well as a wide variety of legislative issues.


Vanderbilt Law Professors Paul Edelman, Brian Fitzpatrick, Sara Mayeux, and Karla McKanders reviewed some of the major cases before the Supreme Court this year. This annual event is sponsored by the Vanderbilt Program in Law and Government, the American Constitution Society, and the Federalist Society.

New York Times: Our Constitution Wasn't Built for This - September 16, 2017 - Professor Ganesh Sitaraman's column focuses on the theme of his new book, “The Crisis of the Middle-Class Constitution: Why Economic Inequality Threatens Our Republic.”  It appeared in the Sept. 16 Sunday Review section of the New York Times.

Associated Press: Lawyer: Marijuana prohibition laws unconstitutional - July 17, 2017 - A Connecticut lawyer is hoping his arguments in a drug case eventually are used by attorneys across the country to fight marijuana charges and bans on pot possession. Aaron Romano says many state laws criminalizing marijuana were based on the federal Marihuana Tax Act of 1937, which essentially criminalized marijuana by imposing harsh financial penalties. He argues the federal law was rooted in racism and bigotry against blacks and Mexicans and therefore was unconstitutional, as are the state bans based on the law including Connecticut’s. Robert Mikos, professor of law, is quoted.

Huffington Post: Can American democracy survive the era of inequality? - April 19, 2017 - Inequality is not the breakdown of an awesome machine. It is a political crisis one that threatens the very foundations of American government, according to a startling new book by Vanderbilt University Law School Associate Professor Ganesh Sitaraman. In The Crisis of the Middle-Class Constitution, Sitaraman argues persuasively that the American Constitution requires a robust middle class to operate, and will break down in the face of prolonged, severe economic inequality. Sitaraman is quoted in the article and interviewed on a podcast embedded in the article.

CSPAN3 (National), CSPAN2 (National) and ABC News (National) aired live confirmation hearings on Judge Neil Gorsuch, nominated for a position on the Supreme Court. Timothy Meyer, professor of law, who clerked for Judge Gorsuch from 2007 to 2008, was interviewed as a member of the witness panel