Amy Brown was named deputy general counsel for housing programs at the U.S. Department of Housing and Urban Development in June 2020. She had previously served as HUD’s associate general counsel for insured housing, where she led a legal team providing advice to the Office of Housing-Federal Housing Administration. Professor Brown joined HUD’s staff as a legal honor in the Office of Litigation after earning her J.D. at Vanderbilt in 2000. In 2002, she moved to the Office of Program Enforcement’s Administrative Proceeding Division, where she later assumed the role of assistant general counsel, handling administrative sanctions, Mortgage Review Board cases, takeovers of public housing authorities and key cases against auditors of public housing authorities. In 2011, Brown moved to the Office of Insured Housing’s Single-Family Mortgage Division, where she ultimately assumed the role of assistant general counsel and expended her expertise in the area of single-family housing, housing counseling and manufactured housing. Brown holds a Master's of Science in Leadership from Washington University, a certificate in public leadership from Brookings Executive Education, graduated from the U.S. Department of the Interior’s Senior Executive Service Candidate Development Program, and was a Partnership for Public Service Excellence in Government Fellow. 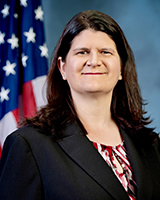