Kirk Henderson has worked as a federal public defender for the Western District of Pennsylvania since 2009. He was named supervisor of the capital habeas unit in 2017. Before joining the federal defenders’ office, Professor Henderson worked as an assistant public defender in the Office of the Public Defender of Allegheny County. In addition to teaching at Vanderbilt Law School, he has taught as an adjunct professor of law at the University of Pittsburgh School of Law. 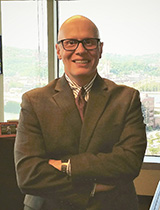