Vidhi Joshi has worked as a federal public defender in the trial unit of the Federal Defender Program for the Northern District of Georgia since June of 2019. After earning her law degree at Vanderbilt, Professor Joshi worked as a staff attorney for the Legal Aid Society of Middle Tennessee and the Cumberlands as a Skadden Fellow, creating and establishing a prisoner re-entry program that assisted low-income individuals leaving incarceration combat legal barriers to reentry in the areas of housing, employment, criminal court debt and civil rights restoration. She served as a judicial clerk to Chief Judge Juan R. Sanchez of the U.S. District Court for the Eastern District of Pennsylvania in Philadelphia for approximately two years before joining the federal public defender’s office in Atlanta. 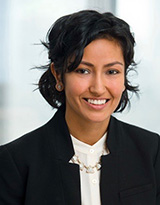