Professors Morgan Ricks, Yesha Yadav and Gary Brown on what, if anything, we learned from the 2008 financial crisis.

Professor of Law Morgan Ricks was a risk-arbitrage trader at Citadel Investment Group in Chicago in 2008 when the investment bank Lehman Brothers collapsed, setting in motion an international banking crisis that became the most dangerous crisis since the Great Depression. Ricks had been watching the developing crisis in the subprime mortgage market with growing alarm since 2007. Convinced that his understanding of financial markets could be of value in engineering a response to the crisis, Ricks joined Treasury Secretary Timothy Geithner’s Crisis Response Team early in 2009.

While working for Geithner, Ricks identified an issue he has studied since leaving the Treasury Department in 2010 to join Vanderbilt’s law faculty: money creation and the design of the U.S. monetary system. “I think financial instability is about monetary system design,” he said. “Pretty much everyone agrees that it’s a core role of government to create money. Once the government has done that, it’s possible for entrepreneurs to establish a business model that piggybacks on the government’s money to create even more money―that’s what banks are. Banks are in the business of money creation in a very real way, but that business model is and always has been very unstable. That instability is the central problem for financial regulators.”

According to Ricks, the challenge of creating a regulatory environment that fosters economic stability has become particularly daunting in recent years because governments and banks are no longer the sole money creators. He finds this concerning because he contends the short-term money market―the so-called “shadow banking” system upon which most businesses and financial institutions rely for their daily operating capital―was a primary catalyst of the collapse. In a recent article, “Entry Restriction, Shadow Banking, and the Structure of Monetary Institutions” (Journal of Financial Regulation, 2016), he argues that limiting banks to their intended role as the government’s money creation infrastructure and eliminating the power of investment firms and businesses to create “money substitutes” would result in greater stability―and also have the advantage of reducing the need to regulate financial products and services.

Ricks looks back on the decade following the 2008 crisis with a wary eye. He is concerned that much of what he terms the “vast new regulatory apparatus” that includes the Dodd Frank Act of 2010 is misdirected since the regulations are designed to promote the stability of individual financial institutions rather than the financial system as a whole. “We have created new systems to deal with the insolvency of large financial institutions, but those systems are still untested,” he said. “We have a system for designating individual financial firms as ‘systemically important’ so they can be regulated by the Federal Reserve Bank, but as of today, zero firms are designated.”

Ricks believes economic instability will remain a threat until stricter limits on money creation are implemented. “We need to go back to the starting point―money creation―and define, legally, what types of financial instruments are money, and then restrict the ability to create these instruments to the government and banks going forward,” he said. “Money creation is a very special activity that should be undertaken only by specially licensed franchises of that state—that’s what a banking charter is. We have essentially privatized money creation, and unless we get a handle on that problem, these other approaches—the regulatory changes we made after 2008―aren’t going to amount to much.”

Like Ricks, Professor of Law Yesha Yadav also found herself on the front lines of the 2008 economic collapse but from a different perspective: as an attorney in the financial regulation and derivatives group at Clifford Chance, based in London and Paris. She recalls a mad scramble as Bear Stearns approached the brink of collapse. “When a major institution like that collapses, other financial firms that have relationships with that collapsing firm have to try to protect themselves,” Yadav said. “There was a kind of panic as firms rushed to protect themselves by seizing resources, seeking to cancel contracts, and trying to find any kind of change in the sofa they could to shore up their risk.”

In August 2008, Yadav became a senior research associate with the Committee on Capital Markets Regulation while earning her LL.M. at Harvard Law School, and she continued her work with the committee while working as a legal counsel to the World Bank’s insolvency and creditor-debtor rights initiative. She joined Vanderbilt’s law faculty in 2011 intent on studying financial regulation and now focuses on the impact of technological advances on regulations and regulatory compliance. She was appointed to the technology advisory committee of the Commodity Futures Trading Commission in January 2018.

Yadav is concerned that regulations aimed at preventing firms from failure may have simply shifted the risk of failure to a different scenario. Banks were required to hold more liquid assets and to raise capacity by issuing shares. While banks have bolstered the value of their rainy-day reserves, sizable blocks of equity are now held by firms such as BlackRock and Vanguard—major providers of mutual funds that are the small investor’s vehicle of choice. In the decade following the crisis, banks rebuilt their loan portfolios and become profitable. Today, Yadav observes, major banks such as JP Morgan Chase, Citibank and Wells Fargo have larger loan portfolios than before the crisis. But she is concerned about small investors’ exposure to banks’ risk through mutual funds. “Are we in a world where these banks continue to be too big to fail?” she asked. “And who will bear the cost of it if they do?”

Stricter bank regulations also accelerated a shift to new financing mechanisms. “People realized there were more innovative ways to do finance,” Yadav said. With an increasing number of startups based on financial technology, or “fintech,” she sees regulatory concerns for investors, borrowers and creditors. “Fintech is evolving so fast that regulators can’t keep up,” she said.

Yadav believes regulators must balance the need to foster and facilitate innovation with protecting consumers. “Evaluating the tradeoffs involved in regulating innovations that may help or hurt consumers is really hard,” Yadav said. In a recent Georgetown Law Review article, she and co-author Chris Brummer identified three criteria for effective regulations: They should provide clear rules, maintain market integrity and encourage financial innovation. But Brummer and Yadav argue that, at best, regulators can achieve two out of three of these objectives. “Regulations are failing to keep up with fintech in part because of a failure to recognize the risks and challenges,” Yadav said. “Some analysts believe fintech represents nothing more than a new type of innovation in finance. We disagree—we believe that this time really is different.”

Lending, she notes, has become largely automated, with companies using artificial intelligence to determine who gets a loan and for how much. Consumers who once relied on banks for loans now use apps offered by technology companies. “Lending decisions for credit cards, car loans and mortgages are now made by algorithms that apply copious amounts of data that sometimes includes online shopping habits, social media use and even the quality of grammar in text messages,” Yadav said. “These innovations offer the potential for major gains by encouraging financial services providers to move away
from blunt measures like FICO scores or lengthy employment histories that can undermine the goal of financial inclusion. But we need to know the underlying processes of how a decision is made. The first-order question is: Do we fully understand the impacts of these technologies?” 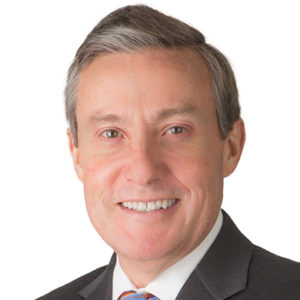 Professor of the Practice of Law Gary Brown ’80 (BA’77) still laughs about being facetiously branded a “bad Republican” in a 2010 Wall Street Journal article for seeking bipartisan solutions to financial regulation while working as a consultant for the Senate Permanent Subcommittee on Investigations. Brown assisted the panel, headed by Sen. Carl Levin (D–Mich.), as members examined the role of mortgage-backed securities in the market collapse. “What surprised and concerned me most was the short period of time between the 2002 financial meltdown related to WorldCom and Enron, which resulted in Sarbanes-Oxley, and the 2008 crisis,” he said.

Brown had also served as special counsel to the Senate committee that investigated the causes of the Enron debacle. “The Senate investigated six groups with oversight responsibility for Enron,” he recalled. “Only two received no additional regulation under Sarbanes-Oxley: investment banks and credit rating agencies.”

Brown believes it was no accident that the problems resulting in the 2008 crisis involved those two groups. “Securitization became the end rather than the means in creating mortgage-backed securities,” he said. “If you have 1,000 bad mortgages and you wrap them all together, you still have 1,000 bad mortgages. When these shaky securities were given inaccurate ratings, we had a perfect storm.”

That storm reached Category 5, Brown asserts, thanks to two earlier Supreme Court decisions that insulated bankers and other private actors from liability. “Those rulings had made it all but impossible to hold investment firms and other market participants accountable for participation in fraudulent schemes,” he said. “Another problem was that investment firms paid credit agencies to grade their investment products, a conflict of interest that yielded unwarranted high ratings.”

Brown and other experts recommended amending the Dodd-Frank bill to incentivize credit agencies to provide more diligent oversight. They also urged tighter restrictions on “synthetic” securities and derivatives, carefully outlining in a memo to committee members the conclusion that these investment vehicles, in some instances, amounted to little more than gambling. “Betting in Las Vegas is highly regulated. My question was, why wasn’t it more highly regulated on Wall Street?” Brown said.

During former Goldman Sachs CEO Lloyd Blankfein’s testimony before the Senate subcommittee, Brown found himself seated behind former Sen. Claire McCaskill. “She turned around in her chair and said, ‘I read this memo, and if I understand it, nobody really owns any assets. One side just bets that it’s going up, and then the other side bets it’s going down. These people at Goldman Sachs―they’re just bookies!’” he recalled.

Brown, who joined Vanderbilt’s law faculty this spring, still believes that investment firms, credit rating agencies and other professionals, including bankers and lawyers, should have greater accountability.  A major purpose of the securities laws, he says, is to maintain trust and confidence in banks and financial markets. “Responsibility for that, in large part, falls on market participants,” he said. “You cannot legislate trust. But regulations can help ensure that they act as responsible gatekeepers―and hold them accountable when they don’t.”