Bayan Sami Abdul Rahman, who is the Kurdistan Regional Government Representative to the U.S., discussed the Kurdish Independence Referendum at Vanderbilt Law School Sept. 27, just two days after the referendum passed with 92 percent of the vote on Sept. 25.

In her talk, Abdul Rahman explained why Kurds agreed to remain a part of the country of Iraq after Saddam Hussein was toppled in 2003 despite decades of persecution under Hussein’s regime, including the Anfal genocide in the late 1980s. “We believed we were entering an Iraq that would be democratic and federal—that would recognize the rights of all,” she said.

Kurdish leadership initially considered holding a referendum on Kurdish independence in 2004, according to Abdul Rahman. “We agreed to set that aside so we could concentrate on fighting ISIS,” she said. 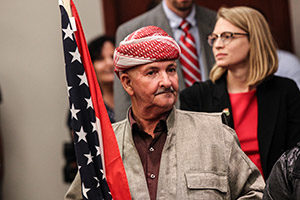 However, since the rise of ISIS, Abdul Rahman said, “Baghdad has not paid our share of the federal budget” to support healthcare and education services for permanent residents as well as for the 1.8 million refugees who have poured into Kurdistan from ISIS-controlled territories. She alleged the Iraqi government has also failed to provide funding for the Kurdish Peshmerga, military fighters whose effort has been crucial in supporting Iraq in the fight against ISIS.

Abdul Rahman delivered her talk and fielded questions from an audience of VLS students and faculty and members of Nashville’s Kurdish community. Vanderbilt provided a livestream broadcast of Abdul Rahman’s talk, which was was co-sponsored by the International Law Society, the Middle Eastern Law Students Association, the Legal Aid Society and the International Legal Studies Program. Vanderbilt provided a live-stream broadcast of the talk

She was introduced by three students who worked with Professor Michael A. Newton to organize and sponsor the talk: Reem Blaik ’19, president of the Middle Eastern law Students Association; Samantha Sergent ’19, president of the International Law Society, and Rachel Johnston ’18, president of the Legal Aid Society, who was an intern in the Kurdistan Regional Government’s Washington, D.C., office in summer 2017.