Jameel Jaffer discussed the ways in which social media platforms shape public discourse and the challenges of determining how their content moderation policies suppress or support the right to free speech in his talk, “Digital Journalism and the New Public Square,” at Vanderbilt Law School on Oct. 30.

Jaffer visited VLS as the 2018-19 George Barrett Distinguished Practitioner in Residence, a program through which the George Barrett Social Justice Program brings a prominent social justice lawyer to Vanderbilt each year to meet with students and deliver a talk. He is the inaugural director of the Knight First Amendment Institute at Columbia University, having joined Columbia’s faculty after serving as a deputy legal director at the American Civil Liberties Union, where he oversaw the organization’s work on free speech, privacy, technology, national security and international human rights. He was introduced by Daniel J. Sharfstein, who holds the Tarkington Chair of Teaching Excellence and directs the George Barrett Social Justice Program. 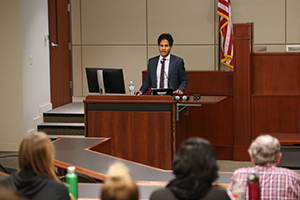 Jaffer’s talk focused on the importance of digital journalism and research focused on the social media platforms. He noted that Facebook, which now has over 2.2 billion active monthly users around the globe, exerts a powerful influence on speech worldwide. “Facebook is one of the largest corporations in the world,” he said. “It affects societies all over the world.”

He began his talk by relating the “remarkable story” published by the British newspaper The Guardian about a Cambridge University researcher, Alexandre Cogan, who used a Facebook app to collect and harvest profiles of Facebook users who were paid a small amount to take “personality” tests. Cogan turned the profiles over to an outside firm, Cambridge Analytica, which used the data harvested from the profiles to influence American voters in the run-up to the 2016 election. “The day before the story was published, The Guardian receive a letter from Facebook threatening a lawsuit,” Jaffer said. “Facebook knew the story would provoke outrage, and they tried to quash it with the threat of a lawsuit.” 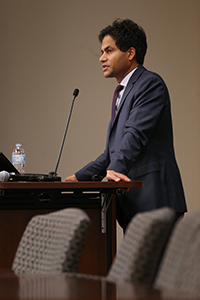 Jaffer criticized Facebook’s effort to suppress the Cambridge Analytica story, but his talk focused on other obstacles to journalism and research focused on social media companies. “Last-ditch legal efforts to block stories before they go to print—like the letter that Facebook’s lawyers sent to The Guardian—aren’t by any means the only obstacles worth worrying about in this context,” he argued. “Perhaps the most significant impediments to journalism and research about the platforms arise from the companies’ terms of service, which bar journalists and researchers from using digital tools that are indispensable to the study of the platforms at scale.”

According to Jaffer, the controls Facebook now places on content posted on its platform and the ways it collects and uses information provided by its users are still not clear to government policymakers or academic researchers who study social media.

Jaffer emphasized that one major problem in developing free-speech policies for Facebook and other social media platforms is that the platforms’ strict terms of use prevent independent journalists and academic researchers from evaluating their content moderation criteria using digital tools. Facebook defends its terms of use vigorously in court, and the threat of legal action brought by a company with unlimited resources to devote to legal battles has chilled efforts by outside researchers, including scholars at academic institutions, to evaluate Facebook’s policies, its information-gathering techniques, and their impact on users and free speech. “It’s difficult to study a digital machine like Facebook without the use of digital tools,” he said. “It’s like trying to study the ocean without leaving the shore.” 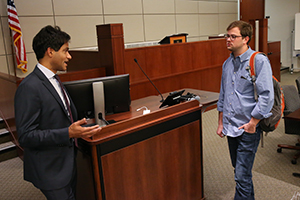 Jaffer proposes that the law should afford special protection to journalists and researchers who study the social media platforms. “Social media companies are private companies that have an immense influence on who can speak, what can be said, and what speech gets heard,” he said. “These corporations shape public discourse and thereby shape our societies, and research and journalism that focuses on them is of special social value.”