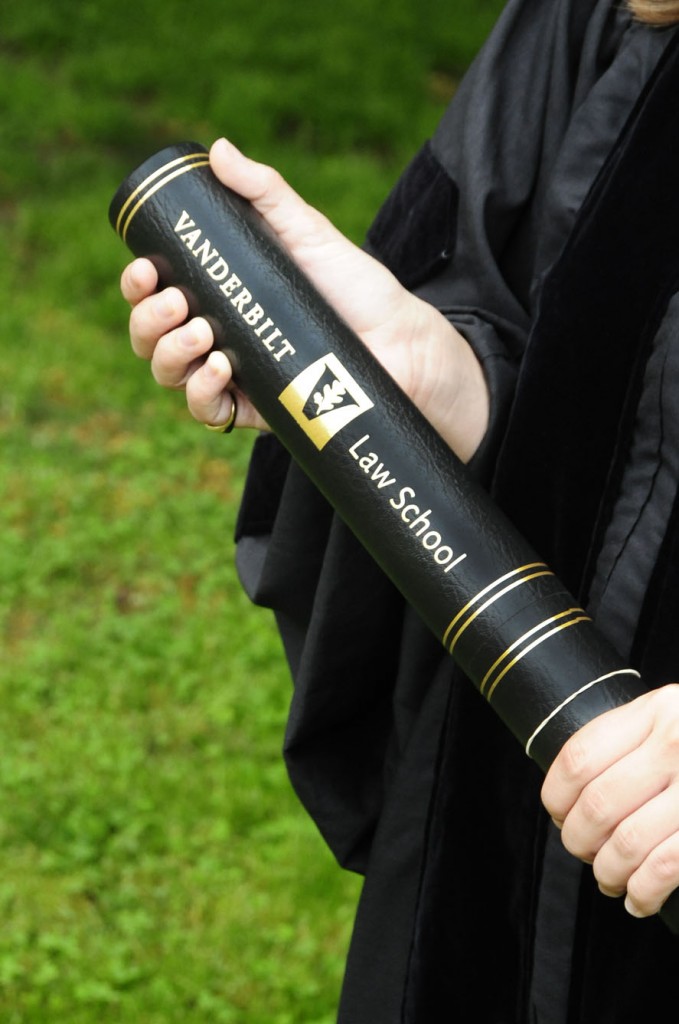 Twenty-one 2014 law graduates were honored with awards recognizing their scholastic achievements and professional and personal leadership during their tenure at Vanderbilt Law School, and recognized during Commencement ceremonies May 9.

William Thomas Marks was awarded the Founder’s Medal, signifying first honors in Vanderbilt Law School’s Class of 2014, at the university’s commencement ceremony. Marks also received the Myron Penn Laughlin Note Award; the Archie B. Martin Memorial Prize for Scholarship, awarded to the student of the first-year law class who earned the highest general average for the year for 2011-12; and the Stanley D. Rose Memorial Book Award for submitting the best legal writing in the field of jurisprudence or legal history in fulfillment of the law school’s advanced writing requirement. Marks is from Charlotte, North Carolina.

Caroline Cecot of Brooklyn New York and Jinghui Lim of Singapore also both received Archie B. Martin Memorial Prizes for Scholarship, awarded to the students of the first-year law class who earned the highest general average for the year, for 2008-09. Cecot and Lim both earned  J.D./Ph.D. degrees in law and economics–Cecot in May 2014 and Lim in August 2013.

Caroline Cecot and Keane Addison Barger both received the Robert F. Jackson Memorial Prize, awarded to the member of the second-year class who maintains the highest scholastic average during the first two years of law school. Cecot was recognized for 2011-12, and Barger, of Brandenburg, Kentucky, for 2012-13.

James Daniel Feltham received the Weldon B. White Prize, awarded to the graduate who submitted the best paper in fulfillment of the law school’s advanced writing requirement. Feltham is from Birmingham, Alabama.

Daniel Zachary Kay and Ann Elizabeth Watford received the Bennett Douglas Bell Memorial Prize, awarded to “the student of the senior law class who is not only well-versed in the law, but who shows the highest conception of the ethics of the profession.” Kay is from Mequon, Wisconsin, and Watford from Birmingham, Alabama.

Ann Elizabeth Watford also received the Philip G. Davidson Award, presented each year to the student who has demonstrated dedication to the law and its problem-solving role in society, and who has provided exemplary leadership in service to the law school and the greater community, and the Law Review Candidates Award, awarded by the second-year staff to the third-year staff member, other than the editor-in-chief, who has made the most significant contribution to their development as staff members of the Vanderbilt Law Review.

Daniel Zachary Kay also received the Damali A. Booker Award, which is presented each year to the third-year law student who has a keen dedication to legal activism and a demonstrated commitment to confronting social issues facing both Vanderbilt Law School and the greater Nashville community; the K. Harlan Dodson Moot Court Staff Award, which goes to the senior member of the Moot Court staff, other than the chief justice, who has rendered the most outstanding service throughout the previous year in all aspects of the Moot Court program; and the Vanderbilt Journal of Transnational Law Outstanding Editor Award, which goes to the member of the third-year staff selecting as having done the most outstanding work on the Vanderbilt Journal of Transnational Law during the academic year.

Ann Elizabeth Watford and Emily Ann Wurtenberger both received the Junius L. Allison Legal Aid Award, which honors the graduates judged to have made the most significant contribution to the work of the Vanderbilt Legal Aid Society during their tenure at Vanderbilt.  Wurtenberger is from Lakeside Park, Kentucky, and Watford from Birmingham, Alabama.

Caroline L. Dye and Katherine Elizabeth Haywood received the Carl J. Ruskowski Clinical Legal Education Award, which goes to the students who, in his or her representation of clients in the law school’s clinical program, demonstrated excellence in practice of law and best exemplified the highest standards of the legal profession. Dye is from Washington, D.C., and Haywood is from Nashville.

Melissa Pearson Tuttle received the Class of 2002 Public Interest Award, awarded to a graduating student entering the field of public interest law. Tuttle is a native of Memphis.

Keane Addison Barger received the Morgan Prize for submitting the most outstanding piece of student writing to the Vanderbilt Law Review during his second year. Barger is a native of Brandenburg, Kentucky.

Sarah Helen Parker of Atlanta and Joseph Peyton Quinn of Lexington, Kentucky, received the Law Review Editor’s Award, which goes to the third-year editorial board members who make the most significant contributions to the Vanderbilt Law Review.

Lauren Elizabeth Gilbert received the G. Scott Briggs Transnational Legal Studies Award, awarded to the third-year student who has exhibited a high degree of scholastic achievement in transnational legal studies and who has made the most significant contribution to the development of international legal inquiries while a student at Vanderbilt. Gilbert is from Nashville.

Stephen Alexander Fowler received the Grace Wilson Sims Prize for Excellence in Student Writing in Transnational Law, awarded for submitting the best Note for publication in the Vanderbilt Journal of Transnational Law. Fowler is from New Rochelle, New York.

Taylor Grace Weaver received the Grace Wilson Sims Medal in Transnational Law, which goes to the editorial board member, other than the editor-in-chief, judged to have done the most outstanding work on the Vanderbilt Journal of Transnational Law during the academic year. Weaver is from Orange Beach, Alabama.

James Patrick Urban received the Chris Lantz Memorial Journal of Entertainment and Technology Law Outstanding Service Award, which goes to the student, other than the editor-in-chief, who has made the most significant contribution to the advancement of the Vanderbilt Journal of Entertainment and Technology Law. Urban is from Latrobe, Pennsylvania.

Kimberly Ann Smith received the National Association of Women Lawyers’ Outstanding Law Student Award, which goes to the student whose law school involvement best fulfills the goals of contributing to the advancement of women in society and promoting women’s issues in the legal profession, and “who has exhibited tenacity, enthusiasm, and academic achievement while earning the respect of others.” Smith is from Defiance, Ohio.

Elizabeth Merrick Turner Parrott received the Jordan A. Quick Memorial Award, awarded to the student judged to have made the greatest contribution to the quality of life at the law school through leadership with the Vanderbilt Bar Association. Parrott is a native of Raleigh, North Carolina.

James Daniel Feltham and Cameron Thomas Norris both received the Richard Nagareda Award, awarded by the Cecil D. Branstetter Litigation and Dispute Resolution Program to recognize extraordinary achievement in the study of litigation and dispute resolution. Feltham is from Birmingham, Alabama, and Norris from Seymour, Tennessee.

Erin Frankrone Merrick received the Journal of Entertainment and Technology Law Student Writing Award, which goes to the graduate who submitted the most outstanding piece of student writing for publication in the journal. Merrick is a native of Louisville, Kentucky.

Andrea Jane Sinclair received the Thomas C. Banks Award for the Outstanding Jessup Moot Court Team Member, awarded by the competition team to the members who have made the greatest contribution to the overall success of the team during the previous year. Sinclair is from Nashville.