A version of this article was published in the January 2019 Tennessee Bar Journal, a publication of the Tennessee Bar Association. It is used with permission 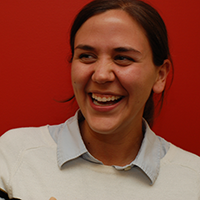 Immigrants today face an almost daily barrage of attacks from politicians and the media: They’re drug dealers, criminals, rapists, animals. They hate America and they want to bring it down. They should be sent back to where they came from.

For the thousands of immigrants living in Nashville, it can be difficult to keep fear and uncertainty from growing in their minds, regardless of their legal status or how they came to the country. For them, a good lawyer is more than just someone who knows immigration law. It is someone who can be a guide, a mentor and a compassionate listener as they work to build new lives for their families in the United States.

For the past nine years, that person often has been Adrienne Kittos ’09. The legal director at the non-profit Tennessee Justice for Our Neighbors, Kittos has embraced JFON’s mission of providing high-quality immigration representation while also counseling and supporting thousands of immigrants.

“Adrienne has tremendous humility and grace, always shying from the spotlight and staying laser-focused on the needs of the clients before her,” Assistant Dean for Public Interest Spring Miller wrote in her nomination of Kittos. “She has secured immigration protections and lawful permanent resident status for hundreds of victims of criminal activity and domestic violence, ensuring that those individuals and their families have the opportunity to live safe, healthy lives in the U.S. … To say that she has transformed the lives of hundreds of families in middle Tennessee over the past nine years would be an understatement.”

Kittos began working with immigrants while an undergrad at Vanderbilt and joined the fledgling Nashville JFON office right out of Vanderbilt Law School. She was the organization’s first full-time attorney.

“It was a pretty lean operation,” Kittos says today of those early days at Belmont United Methodist Church, which hosted the organization in a room next to where the church’s bell choir practiced. “But we were lucky to have a board and volunteers who connected us with other nonprofits doing work here in the Nashville immigrant community.”

Tennessee Justice for our Neighbors is one of 19 branches nationwide of the organization founded in 1999 by the United Methodist Church as a practical response to the legal challenges that low-income immigrants face in the United States. Nashville attorney Katherine Dix launched the Nashville office that now annually serves more than 500 clients a year from more than 40 countries. Wade Munday serves as executive director for the team now based at Casa Azafrán.

Some of Kittos’ first cases involved U Visas — visas set aside for victims of crime who were willing to assist law enforcement in the investigation or prosecution of the criminal activity. Today, those still make up much of her practice. “U Visa work is really incredible,” Kittos says. “The types of crimes that people have lived through … and to make something good come out of that … it is really redemptive.”

One of those cases involved Rocío Martínez, who came to the United States from Mexico as a teenager. She worked steadily and had children, but feared deportation and separation from her children. With the help of JFON, she was able to obtain a U Visa, because she had been a crime victim who helped police arrest and prosecute the man who had robbed her and others.

“The resilience of our clients is just incredible,” Kittos says.

Kittos’s other work is equally compelling. She has helped develop strategies to counsel and protect Deferred Action for Childhood Arrivals (DACA) recipients fearful of losing their status and also advocated for unaccompanied immigrant children facing deportation. “The biggest thing to deal with is the fear people have with [immigration law] changes,” she says. “It is hard to keep track of what’s going on. They may hear something from a neighbor or online that may not be true or may not affect them. But at the same time, many changes do affect them. … It’s a little bit hard to advise people when things are changing so quickly and some of  the options that may have been available in past we don’t have now.”

Kittos has also pushed forward JFON’s educational mission. Once a month, TN JFON hosts a Saturday legal clinic that typically involves more volunteers than clients. The volunteers, many of them church  members, are there to assist the clients, but they are also there to meet and interact with immigrants who may be from a different culture and have different life experiences, but still share common interests and values.

Kittos has also engaged attorneys newly interested in providing pro bono immigration-related services. Miller, who is also the assistant dean for public interest at Vanderbilt Law, recalls one clinic where Kittos had nearly 20 students helping her conduct intake and provide advice to clients at a clinic.

This educational work gives Kittos hope even during these difficult times for immigrants. “Things are so divisive, it is hard to help people understand who it is we are working with,” she says. “I think a lot of that is a misunderstanding of how our system works. I talk to people who are not friendly to the work I do, but it is because they don’t really understand. I honestly believe that for many people, if they just had a little more education about what people are facing and what the immigration system really looks like, we would be in a better place.”