Alistair Newbern, who previously taught Vanderbilt’s Appellate Litigation Clinic, and Nashville-based trial lawyer Jeffery S. (Chip) Frensley ’95 have both been selected as magistrate judges on the U.S. District Court for the Middle District of Tennessee, based in Nashville. Their investiture ceremony will take place Oct. 21.

Newbern joined Vanderbilt’s law faculty in fall 2008 and launched its Appellate Litigation Clinic, in which third-year law students work on behalf of clients who could not otherwise afford representation. She had previously taught at the University of North Carolina School of Law, where she directed the Civil Legal Assistance Clinic. She began her legal career at Lieff Cabraser Heimann and Bernstein in Nashville. In 2004, she accepted a teaching fellowship in Georgetown University Law Center’s Appellate Litigation Program. She earned her J.D. from the University of California Berkeley School of Law, and clerked for Judge Martha Craig Daughtrey ’68 on the U.S. Court of Appeals for the Sixth Circuit and Judge Aleta Trauger ’76 on the U.S. District Court for the Middle District of Tennessee.

Before his appointment to the bench, Frensley maintained a private general litigation practice in Nashville, focusing on criminal defense, employment law and civil rights. He practiced with partner Charles R. Ray ’73 until Ray’s death in 2006. Frensley is a member of the Criminal Justice Act Panel for the Middle District of Tennessee, where he has been recognized as panel lawyer of the year. He has served since 2009 as the Chief National CJA Panel Attorney Representative to the Defender Services Committee of the U.S. Judicial Conference, representing almost 14,000 lawyers nationwide who represent indigent clients in federal court. In 2015, he was one of 11 members appointed by Chief Justice John G. Roberts of the U.S. Supreme Court to a committee to conduct the first comprehensive review of the Criminal Justice Act in more than 20 years. 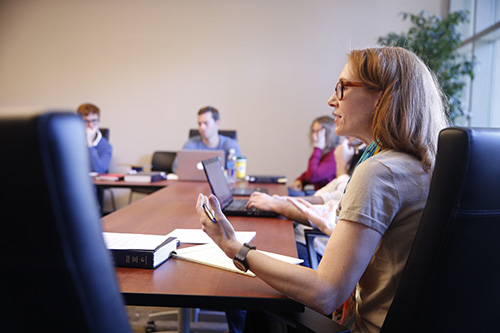 “Alistair has been an outstanding teacher and mentor at Vanderbilt, where she also helped build and expand our George Barrett Social Justice Program over the past eight years,” Chris Guthrie, Dean and John Wade-Kent Syverud Professor of Law, said. “I’m grateful for her service here, and I know she and Chip Frensley will be outstanding additions to the Middle District.”

Newbern’s tenure at Vanderbilt ended with a victory. On Aug. 16, the Vanderbilt Appellate Litigation Clinic won Luis v. Awareness Technologies, a suit argued before a Sixth Circuit panel that included Judges Alice M. Batchelder, Gilbert S. Merritt Jr. ’60 and Ronald L. Gilman. The case, which was briefed by four students in the Class of 2016, addressed privacy rights by challenging the legality of spyware marketed by Awareness Technologies to monitor personal communications undetected.