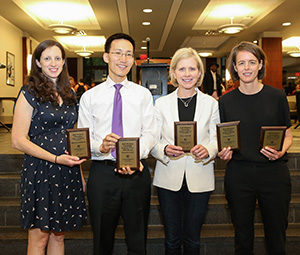 Hall-Hartman Awards are based on a student poll administered by the student-led Vanderbilt Bar Association. The annual awards, which recognize excellent teaching of both first-year and upper-level classes, are given to one professor in each of Vanderbilt’s three first-year sections and to two professors who taught upper-level courses, with separate categories for large classes with 30 students or more and classes with fewer than 30 students.

Hall-Hartman Awards are a longstanding Vanderbilt tradition recognizing faculty whose teaching is deemed outstanding in each first-year student section and for large and small upper-level elective courses. The awards are named in honor of former professors Donald J. Hall and Paul Hartman, both of whom spent their academic careers at Vanderbilt and were revered for their teaching.

“These awards are hard to win because we have so many outstanding teachers on our faculty, so they are coveted,” Dean Chris Guthrie said. “Professors cherish this recognition because it comes directly from the students they’ve taught this year.”

Tracey George was honored for her first-year Contracts class by students in Section A. George holds the Charles B. Cox III and Lucy D. Cox Family Chair in Law and Liberty and directs the law school’s Branstetter Litigation and Dispute Resolution Program. 2017 is the seventh year in which George has been recognized by students with the Hall-Hartman Award.

Rebecca Allensworth was honored for her first-year Contracts class by students in Section B. Her work explores the theoretical basis of the rule of reason and its application to self-regulation, from appeal to expertise to arguments about market failure. Professor Allensworth is affiliated with Vanderbilt’s Law and Business Program. She also teaches Antitrust Law and a seminar on the jurisprudence and scholarship of Richard Posner. She also received a Hall-Hartman Award for her Contracts class in 2015.

Ingrid Wuerth, who holds the Helen Strong Curry Chair in International Law, was honored both for her first-year Civil Procedure class by students in Section C and for her upper-level Foreign Affairs seminar. A leading scholar of foreign affairs and international law in domestic courts, Wuerth directs Vanderbilt’s International Legal Studies Program. 2017 is the fourth straight year in which Wueth has received the Hall-Hartman Award.

Edward Cheng, whose research and teaching focus on evidence law, was honored by upper-level students in the category of courses with 30 students or more for his Evidence class. This is the fifth year in a row in which Cheng—who is a co-author of a five-volume treatise, Modern Scientific Evidence, which is updated annually—has received the Hall-Hartman Award. In fall 2016, Cheng launched a podcast focusing on evidence law scholarship, Excited Utterance, which now has over 1,200 subscribers.