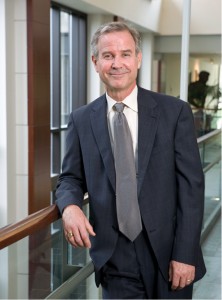 an article co-authored by Randall Thomas, the John S. Beasley II Distinguished Professor of Law, with James Cox of Duke Law School, has been selected as one of the Top 10 Corporate and Securities Articles published in 2018. Selected articles are reprinted in Corporate Practice Commentator.

This is the 13th article authored or co-authored by Thomas selected for inclusion in the annual compendium of leading scholarship in corporate law. Thomas directs Vanderbilt’s Law and Business Program.

“Delaware’s Retreat” was published in the Delaware Journal of Corporate Law (42: 323-389) in 2018. Thomas also presented the paper as the Francis G. Pileggi Lecture in Law at the Widener University Delaware Law School.

In their article, Thomas and Cox address a power struggle between corporate boards of directors and activist shareholders that played out in courts throughout the nation, and its impact on Delaware courts’ accepted role of establishing and maintaining the legal precedents that undergird American corporate governance law.

They contrast the 1980s, when four important cases―Revlon, Weinberger, Unocal and Blasius―established solid precedents that courts applied in cases addressing corporate governance, fiduciary duties of directors, and the relationship between boards and shareholders, with the early 2000s, during which more than 96 percent of publicly disclosed mergers attracted litigation brought by shareholders. The avalanche of litigation, which was also brought in variety of venues outside of Delaware, threatened the ability of Delaware courts to maintain their long-established responsibility of providing consistent judicial oversight of corporate governance. Regulators responded by developing bylaws governing forum selection specifically designed to direct these cases back to Delaware courts, which then sought to staunch the flow of shareholder litigation by setting a high bar for plaintiffs in cases involving disclosures.

However, Thomas and Cox contend, in recent years, the Delaware courts themselves have chipped away at the precedents set during the 1980s, which they term “the Golden Age of Delaware corporate law.” Their article examines how the precedents in these four foundational cases have been weakened by subsequent Delaware Supreme Court decisions. They conclude that “existing market forces and shareholder oversight are sufficient to curtail managerial misconduct” at present. However, they also emphasize that courts may need to intervene more actively again in the future if the means for effective shareholder oversight are undermined.