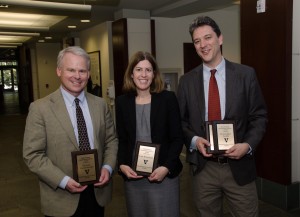 Professors honored for teaching during the 2013-14 academic year include:

Hall-Hartman Awards are a longstanding Vanderbilt tradition recognizing faculty whose teaching is deemed outstanding in each first-year student section and for large and small upper-level elective courses. The awards are named in honor of former professors Donald J. Hall and Paul Hartman, both of whom spent their careers at Vanderbilt and were revered for their teaching.

“It is extremely hard to win a teaching award at Vanderbilt Law School because of the many outstanding teachers on our faculty,” Dean Chris Guthrie said. ”Professors cherish this recognition because it comes directly from the students they’ve taught.”