Under the leadership of Vanderbilt Moot Court Board Chief Justice Braden Morell ’20, Executive Justice Marcos De Hoyos ’20 managed a team of third-year students who organized and ran the competition. 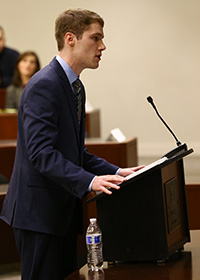 The problem, written by executive problem editor Paige Tenkhoff ’20 and associate problem editors Elizabeth Holden ’20 and Charlotte Elam ’20, followed the case of Louisa Beezly, a nurse who is stopped by the police and arrested for reckless driving. Beezly gives the officer permission to search her car, and he finds a stash of prescription oxycodone. He asks her if the drugs are hers, and she remains silent. He then reads her Miranda rights. The prosecution seeks to introduce evidence at trial of Beezly’s silence as substantive proof of guilt. She files a pretrial motion to suppress the evidence, but her motion is denied, and the evidence admitted. Beezly was convicted for possession of Schedule II narcotics.

At sentencing, Beezy is shackled due to to a district court policy that mandated shackling for all criminal defendants at non-capital bench sentencings. She objects, but her objection is denied, and she appears before the judge in shackles. 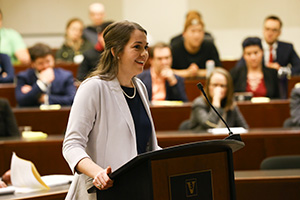 Beezly appeals her conviction on the ground that the admission of the silence evidence violated the Fifth Amendment and also appeals her sentencing on the ground that she was shackled in violation of her due process rights. The Court of Appeals affirms the district court’s holdings on both issues, holding that both the admission of the silence evidence and the district court’s blanket shackling policy were constitutional. One judge dissents, arguing that the district court should neither have admitted the evidence nor shackled Beezly. She appeals to the Supreme Court.

The John A. Cortner Award, which goes to the winners of Vanderbilt’s annual Bass Berry & Sims Moot Court competition, honors John Cortner ’86, who served as the Moot Court Board’s chief justice. Cortner joined Bogle & Gates in Seattle after graduatio006E but was diagnosed with Hodgkin’s disease soon after and died within the year. His family endowed the award in 1988 in his memory.