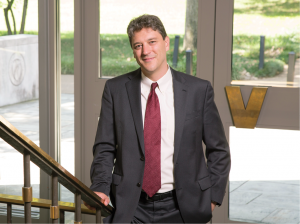 Christopher Serkin has been appointed to the Elisabeth H. and Granville S. Ridley Jr. Chair in Law.

His articles have appeared in the Chicago, Columbia, Michigan, New York University, Cornell, Notre Dame and Northwestern University law reviews, among other law journals. He is the author of The Law of Property, a Concept and Insights book (2nd edition, 2016), and a co-editor of a leading casebook, Land Use Controls (4th edition, 2013).

Florence Ridley, professor emeritus of English at the University of California, Los Angeles, endowed the chair in honor of her parents, Granville Sumner Ridley Jr. and Elisabeth Howse Ridley. Granville Ridley earned his undergraduate and law degrees at Vanderbilt in 1914 and 1916, respectively, before serving as an Army commander in World War I. Ridley’s long and distinguished legal career in Nashville included appearing before the U.S. Supreme Court and serving as a special justice to the Supreme Court of Tennessee. He died in 1982 and was honored posthumously with the law school’s Distinguished Service Award in 1987. His wife, Elisabeth Howse Ridley was a graduate of Middle Tennessee State College who taught in public schools and authored three popular books before her death in 1984.

“Chris Serkin’s keen insights about land use and the nature of property are advancing the field of property law, and he’s an excellent teacher and a gifted leader,” said Chris Guthrie, Dean and John Wade-Kent Syverud Professor of Law. “I’m grateful to Florence Ridley for her generous endowment of this new chair, which allows us to recognize and reward Chris’s career accomplishments, and I’m grateful to Chris for his service to the law school.”

Serkin earned his undergraduate degree in philosophy at Yale University and his J.D. at the University of Michigan School of Law, where he was a Clarence Darrow Scholar and an articles editor on the Michigan Law Review.

Serkin began his academic career at New York University School of Law, where he taught for two years as an acting assistant professor in its Lawyering Program. Before entering the legal academy, he practiced law at Davis Polk & Wardwell in New York. After earning his J.D., he was a law clerk for Judge John M. Walker Jr. of the U.S. Court of Appeals for the Second Circuit and for Judge J. Garvan Murtha of the U.S. District Court for the District of Vermont. He has been a visiting professor at the University of Pennsylvania, the University of Chicago, and New York University.

Serkin delivered a lecture, “What Property Does,” at the law school Oct. 23.