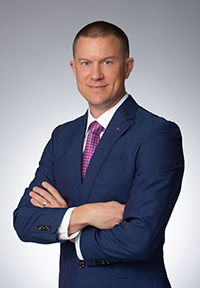 Clayton Wiggins ’16 argued United States v. Begani in March before the U.S. Court of Appeals for the Armed Forces, the military’s highest court. The case addresses the constitutional limits of Congress’s authority to define military service. Wiggins represented the United States, and Steve Vladeck, a professor at the University of Texas Law School, represented the appellant.

The case involves a military retiree, Stephen Begani, who was court-martialed after leaving active-duty service in the U.S. Navy. Begani had been arrested in Japan for attempted crimes with a minor a month after his retirement. He was convicted and sentenced to 18 months confinement. He also received a court martial and bad-conduct discharge from the Navy. Begani appealed, arguing that it was unconstitutional to subject military retirees to court martial for offenses committed after they leave active duty.

An opinion in the case will be handed down later this year. “Depending on the outcome and that of a similar case, Larrabee v. Harker, currently before the D.C. Circuit Court of Appeals, the next stop for United States v. Begani could be the United States Supreme Court,” Wiggins said. “Arguing this case against an attorney of Professor Vladeck’s stature was truly an honor.”

Wiggins has been stationed in Washington, D.C., for two years.  As a senior appellate council in the JAG Corps, he represents the United States in appeals before the Navy-Marine Corps Court of Criminal Appeals and the CAAF. The CAAF is staffed by civilian judges appointed by the president, and it has worldwide jurisdiction over all members of the armed forces on active duty and other persons who are subject to the Uniform Code of Military Justice. The CAAF’s docket includes cases that raise issues of constitutional, criminal, administrative and national security law, evidence and ethics. Like other federal appeals courts, its decisions are subject to direct review by the Supreme Court.

Wiggins says the opportunity to work on such a broad spectrum of appellate cases within three years of graduating from law school is one of many reasons he has relished his service a judge advocate in the Marine Corps. Before being tapped to work in the Department of the Navy’s appellate division in 2019, Wiggins spent three years at the trial level as a military prosecutor stationed on Okinawa, Japan.

Wiggins joined the Marine Corps in 2009 and attended Vanderbilt Law School while on active duty after qualifying for the Funded Legal Education program. He had applied for the prestigious program, through which military officers can receive tuition, fees and a book allowance along with full pay from their branch of the service to attend law school, to as soon as he became eligible in 2013. “For me, law seemed to be a next natural step in my service career,” he said.

Wiggins learned that he had been accepted for the program while deployed in the Red Sea on the USS Peleliu. He had earned his undergraduate degree at the University of Tennessee, and Vanderbilt was his top choice for law school. In addition to support from the Marines, he received a Thomas W. Beasley Scholarship, endowed by Tom Beasley ’73 specifically to support veterans and active-duty service personnel.  “Mr. Beasley and his family have a genuine interest in seeing veterans succeed at Vanderbilt and expect them to then go out to make the world better,” said Wiggins.  “I hold Mr. Beasley and his family in the highest of regards.”

“Clayton Wiggins embodies the best qualities of a Beasley scholar and Vanderbilt Law alumni,” said Michael A. Newton, professor of the practice of law, who mentored Wiggins at VLS. “He’s personable, utterly professional, and was fully prepared at graduation to serve his client. In listening to his oral argument in U.S. v. Begani, I’m struck by its sincerity and depth.”

After law school Wiggins attended the Naval Justice School in Newport, Rhode Island, and was then assigned to serve as a prosecutor. “Naval Justice School puts a military shine on your three years of legal education; it’s where you learn about the Uniform Code of Military Justice,” he said.

Wiggins says his experience as a military prosecutor was excellent preparation for criminal appellate practice. “The daily grind of a prosecutor, including motions practice, guilty pleas and contested trials, was an indispensable foundation for understanding the intricacies of the cases I now work on appeal,” he said.

He also credits his experience in the Appellate Litigation Clinic, taught by Alistair Newbern—now a magistrate judge for the Middle District of Tennessee—as whetting his appetite for appellate work. Under Newbern’s supervision, Wiggins argued a case before the Sixth Circuit Court of Appeals in 2016. His current workload includes appeals of convictions for crimes ranging from misdemeanors to assault, rape, murder and larceny. “We handle all appeals from any court-martial in the Navy or Marine Corps,” Wiggins said.  ”I cannot imagine being where I am without the encouragement and guidance of Professor Newton, Judge Newbern, and so many others at Vanderbilt Law School.”