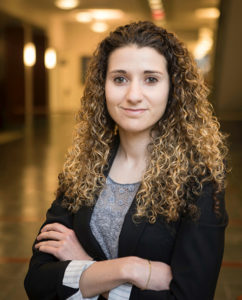 Emily Lamm ’19 has won the National LGBT Bar Association’s Michael Greenberg Writing Competition with her article, “Bye, Bye, Binary: Updating Birth Certificates to Transcend the Binary of Sex,” which was published in the Tulane Journal of Law & Sexuality in spring 2019.

The award was established in memory of Michael Greenberg, a former National LGBT Bar Association Board member and Philadelphia attorney who died in 1996 from complications of AIDS, to recognizing outstanding scholarship on legal issues affecting LGBTQ persons.

Lamm contends that birth certificates that assign newborns permanently to one of two genders set the stage for employment, education and housing discrimination and even violence for individuals who are gender non-conforming. “Once an individual’s ‘sex’ is assigned, that immediately becomes a person’s assumed gender identify,” Lamm said. “I argue for removing binary sex assignment altogether from birth certificates. Birth is simply too early to impose a gender identify that will be legally binding for life.”

Another article by Lamm, “Flexibly Fluid and Immutably Innate: Perception, Identity and the Role of Choice in Race,” will be published in the William & Mary Journal of Race, Gender and Social Justice in 2020. Lamm wrote the article, which addresses the role of choice in racial identity, for the Race and Law Seminar, taught by Professor Beverly Moran. Lamm has also co-authored, with Dean Chris Guthrie, an essay, “The Aid Gap,” which will be published in the Journal of Legal Education in fall 2019.