Vanderbilt rose to the top of Emily Sachs’ list because it offered several opportunities to gain expertise and experience in health law. Sachs had designed her own major in bioethics at Muhlenberg College before law school. After applying to 22 law schools, she ultimately chose Vanderbilt because “the health law opportunities, such as the Health Law Society and the Medical Legal Partnership, and health law experts, such as Professor (James) Blumstein and Professor (Ellen) Clayton attracted me to VLS.”

As a 2L Sachs worked as a research assistant for Clayton, a bioethicist who teaches at both Vanderbilt’s medical and law schools, and served as director of the Medical Legal Partnership, a program through which law students screen patients at a medical clinic run by Vanderbilt Medical students to determine if they need legal assistance as well as health care services. “I really enjoyed my time working with the patients and the other law students,” she said, “and I was able to try out a couple of ideas for improving the program.”

Sachs allowed Vanderbilt’s Career Services department to guide her in choosing a legal job market where she could achieve her career goal of practicing health policy law. “I had originally hoped to return to my hometown, Philadelphia,” she said. “Career Services encouraged me to consider other cities, including D.C., which really opened up the possibilities for health law practice.”

After clerking for Judge Eduardo Robreno of the U.S. District Court of the Eastern District of Pennsylvania, Sachs plans to join Latham & Watkins in Washington, D.C., where she will focus on Food and Drug Administration regulatory matters. She got a preview of the kind of work she would be doing as a summer associate in 2019. “I did a wide variety of FDA work, such as drug device compliance and dietary supplement work there,” Sachs said, “and I loved the people.”

Sachs won the Lightfoot Franklin and White Legal Writing Award for Best Brief after her 1L year and joined the staff of the Vanderbilt Law Review as a 2L. “I wanted to be a law clerk, so working on a journal was a priority for me,” she said. “It’s been a great opportunity to increase my legal writing skills and get wider exposure to legal scholarship.” She is serving as one of the journal’s managing editors as a 3L.

“Vanderbilt has exceeded my academic expectations,” she said. “I could not ask for a better group of professors to learn from and students to learn with. The VLS community is filled with hard-working people who also love to have a good time and spend time with each other outside of the law school setting. I have felt very supported by classmates and professors during my time here, and I can’t imagine having a better law school experience.” 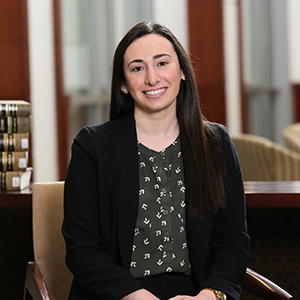