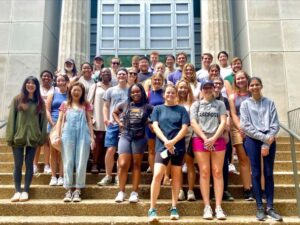 Emma Harrison ‘24, Leah Field ’24 and Molly McCue ’23 led  a driving tour of historic Nashville sites that included the downtown lunch counter that was the site of a historic 1959 sit-in by black students seeking to desegregate what was then Harvey’s Department Store; the Civil Rights Room at the Nashville Public Library; the Hermitage Hotel, which played an integral role in the ratification of the Nineteenth Amendment granting women’s suffrage; Tennessee’s Legislative Plaza; First Baptist Church, which had the first Black minister in Nashville; the former Nashville Slave Market and Centennial Park, where a historic marker noting the history of Nashville’s segregated public swimming pools and their closure when black activists sought to integrate them was recently erected.

Delaney Beck, JD/PhD in law and economics, Falynn Dunkelberger ‘24, Grace Su ‘24 and Robert Binkowski ‘24 led a walking tour of the Vanderbilt campus, visiting Kirkland Hall, which houses the Vanderbilt University administration and was recently the site of an Occupy Nashville protest; Vanderbilt Divinity School, which hosted the first interdenominational church in the South; Peabody College, originally established as Roger Williams University after the Civil War to educate black students and later acquired by Vanderbilt University after years of neglect during the Jim Crow era; the former Confederate Memorial Hall at Vanderbilt University, which was renamed after a decades-long controversy; and Edgehill United Methodist Church, which became one of Nashville’s first integrated churches after it was founded in 1966 as a community room.

“The focus was to connect incoming Vanderbilt students with the enduring legacy of social justice and the Civil Rights movement on campus and in Nashville,” said Dunkelberger, who helped organize the tours.

The students who organized the Aug. 14 tours are members of Law Students for Social Justice, a student organization, and the tours were co-sponsored by the Office of Diversity, Equity and Community and the George Barrett Social Justice Program.

All incoming students in the Class of 2025 received a copy of I’ll Take You There, courtesy of the Office of Diversity, Equity and Community. Law Students for Social Justice also hosted a summer social justice reading and engagement group for incoming 1Ls and LLM students in July and August, in which students discussed intersectional perspectives about topics in civil law that were related to 1L courses. Students are also invited to a September session to learn how they can get involved with the social justice community at VLS.