Timothy Meyer, professor of law and Enterprise Scholar, delivered testimony before the Senate Committee on the Judiciary today supporting the nomination of Judge Neil M. Gorsuch of the U.S. Court of Appeals for the Tenth Circuit to the Supreme Court of the United States.

Meyer was a law clerk to Judge Gorsuch in 2007-08 after earning his J.D. at the University of Califiornia, Berkeley, where he graduated first in his class. He received a Dean’s Fellowship in 2007-08, and completed his dissertation, “The Evolution of International Law,” and received his Ph.D. in jurisprudence and social policy from UC-Berkeley in December 2008. 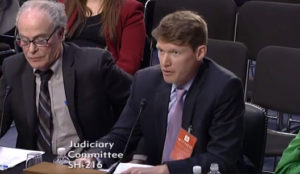 “Courts, Judge Gorsuch told me repeatedly, cannot reach out to decide questions not properly raised by the litigants,” Meyer stated in his testimony before the Senate Judiciary Committee. “In our democratic system, that rule serves as a critical check on the power of the courts. At the same time, when Congress has spoken to an issue the courts must apply the law as written. Indeed, the courts must do so even when the government vigorously objects. The judge’s duty is to enforce the protections against government overreach that the people’s representatives have enshrined in the Constitution and statutes. I never once saw the Judge shy away from doing so. The United States would be well served by someone with that kind of courage on the Supreme Court.”

Leah Bressack ’08, an assistant U.S. attorney in Washington, D.C., was among other former Gorsuch clerks who testified in support of Judge Gorsuch’s nomination on behalf of the majority. Bressack was a law clerk for Judge Thomas Griesa of the U.S. District Court for the Southern District of New York in 2008-09 before clerking for Judge Gorsuch in 2009-10.