Vanderbilt Law School’s International Law Practice Lab has submitted an amicus brief to the African Commission on Human and Peoples’ Rights in a human rights case, Abubaker Ahmed Mohamed and 28 others v. the Federal Democratic Republic of Ethiopia. The case, which is currently pending before the commission, challenges Ethiopia’s counter-terrorism statute, which has regularly been used to silence those critical of the government, including advocates, journalists, political opponents, and ethnic, religious and other minority leaders. 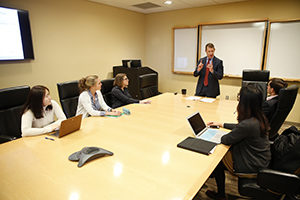 The brief was prepared by Vanderbilt Practice Lab students under the supervision of Michael Newton, who teaches the practice lab, and British attorney Oliver Windridge, an expert in international criminal and human rights law, on behalf of Abubaker Ahmed Mohamed and 28 additional named plaintiffs, all Ethiopian citizens who participated or publicly supported a series of peaceful protests of government interference in the exercise of their Muslim faith. The case challenges the plaintiffs’ arrests, detentions, ill-treatment and convictions under the law, which were in apparent retaliation for exercising their rights to freedom of religion, expression and assembly. The Practice Lab’s amicus brief was presented to the commission to inform its deliberations on the question of whether Ethiopia’s counter-terror law violates best practices and international standards for criminalizing acts of terrorism.

Ethiopia enacted its anti-terror statute, Proclamation 652/2009, in August 2009 with the stated intent of combating domestic terrorism. Article 3 of the statute defines a terrorist offense as one where a person or group seeks to advance a cause by coercing the government, intimidating the public, or “destabilizing or destroying the fundamental political, constitutional or economic or social institutions of the country,” and—as a result—causing one or more harms. Harms included in the statute range from death or serious bodily injury to lesser harms such as a “disruption of any public service” or property damage

“In its amicus brief, the Practice Lab argues that this definition violates international law because it is overly broad and includes a huge array of offenses which do not rise to commonly accepted definitions of terrorism,” Newton said. “The brief also argues that the definition is too ambiguous and fails to provide adequate notice of what acts will constitute an offense, and that it criminalizes constitutionally protected activities, such as the exercise of freedoms of religion, expression, association and assembly. 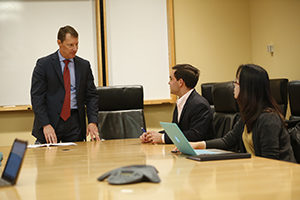 “The brief emphasizes that these flaws are not merely academic,” he continued. “Ethiopia has repeatedly cited the Anti-Terror Statute to criminalize those who engage in peaceful protest hoping to change public policy or raise awareness of perceived human rights abuses. Finally, the brief argues that, because the law includes relatively minor criminal offenses, such as property damage, it imposes disproportionate penalties on offenders who engage in criminal acts, which undermines the statute’s alleged purpose of preventing and responding to heinous and violent acts of terrorism.”

Vanderbilt’s International Law Practice Lab provides expert international legal assistance and support to governments, non-governmental organizations, and international and multinational organizations. Professor Newton, who directs the Practice Lab, is an expert on terrorism, accountability, transnational justice, and conduct of hostilities issues who has published more than 80 books, articles, op-eds and book chapters. Oliver Windridge, who was a supervising attorney on the Mohamed v. Ethiopia amicus brief, is founder of The ACtPHR Monitor, a forum for news, comment and debate on the African Court on Human and Peoples’ Rights. He is one of five non-African lawyers appointed to the African Court’s inaugural Legal Aid List of Counsel, and he has advised numerous individuals and NGOs on bringing cases before the African Court and Commission.