After earning his undergraduate degree in sport management, Jeff Turner moved to Detroit to work as an assistant coach for the men’s lacrosse team at the University of Detroit Mercy. “Coaching was a great job and something I was really passionate about. It was a hard decision to leave the sport of lacrosse and change career paths,” he said.

After deciding to earn a J.D., Jeff applied to more than 15 law schools. “I’d spent my life in team sports, and I looked for a school with that same team environment,” he recalled. “Vanderbilt was the one place where that clicked.”

Jeff was accustomed to hard work; he had coached and recruited Division 1 lacrosse players fulltime while earning his MBA. His biggest adjustment was the transition from collaborative enterprises—a sports team and business school—to law school, where group projects are rare. His search for collaborative work led him to join the staff of the Vanderbilt Law Review, where he was executive editor his 3L year. “That role has aptly been described as a ‘chief operations officer’—you have to wear lots of different hats. The executive editor has a large editing role, manages the Law Review finances, works with the editor-in-chief on strategic decisions and handles internal operations,” he said. “It was a great opportunity to work on a close-knit team during law school and gain leadership experience in a very different realm. I also substantially improved my writing and editing skills.”

Jeff also took a leadership role in the American Constitution Society, serving as its treasurer his 2L year. “It was a great opportunity to use my business background and apply it to an organization and cause that I am extremely passionate about,” he said.

Jeff particularly appreciated his classroom experiences. “Vanderbilt has surpassed my academic expectations,” he said. “VLS faculty have impressive credentials, and they’re also engaged in teaching and connecting with students. One day, your professor is quoted in the New York Times; the next, they’re inviting the class to their home for dinner.”

Jeff plans a career as a civil litigator, and he found his Evidence class with Professor Ed Cheng particularly compelling. One day particularly stood out to him. “Professor Cheng was “teaching a class about expert witnesses—specifically, ‘connoisseur experts’ with expertise in unique areas,” he recalled. “He used a chocolate example: Everyone got four pieces of chocolate, and you had to try to determine which one was from which country. But instead of just buying chocolate from the corner store, he ordered from high-end specialty chocolate producers in South America. The chocolate was amazing, and it was impressive to see how much effort and planning he put into an in-class demonstration.”

Jeff came to law school knowing he wanted to return to the Midwest upon graduation. He applied for positions in Chicago and his home state, Michigan. “The VLS Career Services office is a terrific resource,” he said. “Dean [Elizabeth] Workman was incredibly helpful and gave me honest assessments of my strengths and weaknesses as a job candidate—and I ultimately accepted a position with Jones Day in Detroit because her hard work in getting me the interview.”

Jeff moved to Nashville with his wife Megan, also a Michigan native.  The couple found a house over a weekend visit and enjoyed their time in the city. “It doesn’t get much better than Nashville,” he said. 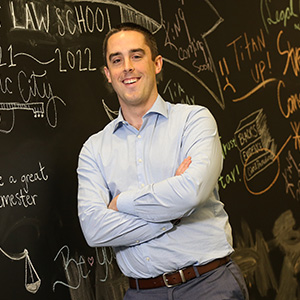