Judge Claria Horn Boom, Class of 1994, has been confirmed to the U.S. Sentencing Commission by the Senate. 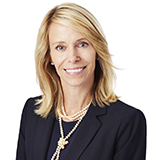 Judge Boom, who serves the Eastern and Western Districts of Kentucky, was nominated to serve on the Sentencing Commission in June and introduced to the Senate Judiciary Committee by Sen. Mitch McConnell, R-KY.

She has served as one of two “swing” judges who preside in two different federal districts since 2018. “[Judge Boom] is part of a small and distinct class,” McConnell said. “This role has offered a masterclass in law and justice. She travels throughout our state, from Pikeville to Paducah, to hear cases affecting every aspect of life in the Commonwealth. It’s a position at the heights of the legal world.”

The U.S. Sentencing Commission is a bipartisan, independent agency in the judicial branch of the federal government. The commission was created by Congress in 1984 to develop a national sentencing policy for the federal courts. It develops sentencing guidelines that provide structure for the courts’ sentencing discretion to help ensure that similar offenders who commit similar offenses receive similar sentences.