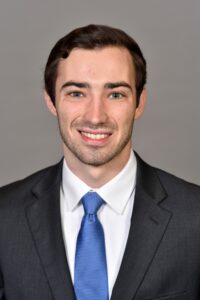 Kyle Brinker’s paper, “A Gundy Revival in the Age of Public Health Crises,” poses an important question: How should lawmakers reconcile a national public health emergency, such as the COVID-19 pandemic, with the limits on government power imposed by the nondelegation doctrine?

Brinker began to ponder this question after reading a dissent authored by Justice Neil Gorsuch in Gundy v. United States, a 2019 case. The fact that Justice Gorsuch was joined in his dissent by Justices John Roberts and Clarence Thomas, Brinker realized , meant that—with the addition of conservative Justices Brett Kavanaugh and Amy Coney Barrett—the nondelegation doctrine, a long-dormant principle in administrative law that precludes Congress from delegating its legislative powers to other entitles, might soon be resurrected by a Court majority.

Brinker’s paper explores the implications of the nondelegation doctrine in light of the public health crisis created by the COVID-19 pandemic. In June the Tennessee Bar Association’s Administrative Law section announced that Brinker had won its 2021 writing competition, which the section recently established to encourage law students in Tennessee to explore current topics in administrative law.

Brinker’s interest in the nondelegation doctrine was piqued by his observation that, with a conservative majority on the Supreme Court, the idea underlying Justice Gorsuch’s dissent might soon result in the revival of a doctrine that has not been applied in almost a century. He notes that, in addition to the two justices joining Gorsuch’s dissent, Justice Samuel Alito expressed an interest in reconsidering the approach in a separate concurring opinion in Gundy, and that Justices Brett Kavanaugh and Amy Coney Barrett, both of whom joined the court after Gundy was heard, have both criticized the use of the current “intelligible principle” doctrine applied to determine if a delegation is too broad.  In her scholarly writings, Barrett has called the intelligible principle “notoriously lax,” while Kavanaugh praised Gorsuch’s dissent in Gundy.

Brinker chose to explore the nondelegation doctrine for his Vanderbilt Law Review Note after conferring two of his professors—Timothy Meyer, whose Constitutional Law class addressed federalism and separation of powers—topics that interest Brinker—and administrative law expert Kevin Stack, who taught Brinker’s
Administrative Law class. “Both professors touched on nondelegation in different ways,” he said. “I wanted to write about the topic because Justice Gorsuch has been a vocal advocate for bringing it back—and I thought that Justice Kavanaugh’s positive comments about the Gundy dissent pointed toward nondelegation playing a bigger role in Supreme Court jurisprudence going forward.”

Brinker found that studying the Gundy case during the pandemic helped him define the tension between the limits on government power mandated by the nondelegation doctrine and the need for nimble, well-coordinated, national responses to crises such as the public health emergency presented by the COVID-19 pandemic.  “Once COVID hit and we started to see the interesting ramifications of COVID policies, I wondered what would happen if Gorsuch’s dissent were ever to become the law,” Brinker said. “I believe the power of the government should not be concentrated in the legislature or the executive branch. But lawmakers need to be able to resolve practical concerns. My article addresses the question of how you respect separation of powers while maintaining the ability to solve very real problems like those posed by the COVID pandemic. Where do you draw the line between flexibility and separation of powers?”

“It was exciting to see Kyle thinking through how the trajectory of constitutional law would respond to the pandemic,” Professor Stack said.

He is a summer law clerk at Fried Frank Harris Shriver & Jacobson in Washington, D.C. and will serve as an articles editor of the Vanderbilt Law Review in 2021-22. He spent summer 2020 in Houston working as a judicial intern for U.S. District Court Judge Alfred Bennett and U.S. Bankruptcy Court Judge David Jones, both of the Southern District of Texas in Houston.