“Family separation is the worst thing I have ever seen in my 25 years of doing this work,” ACLU attorney Lee Gelernt told more than 100 people who attended his 2018-2019 George Barrett Social Justice Lecture on Oct. 5.

Gelernt is the lead attorney in the Ms. L litigation, a national class action case brought by the American Civil Liberties Union in San Diego, California, on behalf of thousands of parents whose children were forcibly removed from them when they arrived at the United States border seeking asylum. The U.S. District Court for the Southern District of California issued a nationwide injunction in June to stop the practice, which Gelernt described as “an enormous victory.” Holding that the practice of separating children from their parents is unconstitutional, the court ordered the Trump Administration to reunite the separated families.

Gelernt, who serves as deputy director of the ACLU Immigrants’ Rights Project, noted that approximately 3,000 families had been separated by federal agents before the injunction was issued. 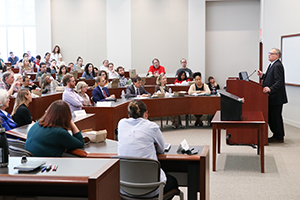 One of the first clients Gelernt represented was a native of the Democratic Republic of Congo whose daughter was removed from her custody at the border and taken to Chicago. “They didn’t tell this mother why they were taking her daughter or where her daughter was going,” he said. “She was from a little village in the Congo–she had no idea where Chicago was. Over the next four months, she only got to speak to her daughter roughly every 10 to 14 days. She didn’t have a lawyer, so the ACLU filed a lawsuit on her behalf.”

That lawsuit expanded to a national class action even before Attorney General Jeff Sessions announced a “zero tolerance” policy of separating children and parents at the border. By the time the preliminary injunction was issued, approximately 3,000 families had been separated. “The order required them to reunite the families that had been separated,” Gelernt said. “The judge gave the government two weeks to reunite children under five–but at this point, there are still children under five who have not been reunited with their parents. The government missed another deadline to reunite children between 5 and 17 with their families. We are still fighting, but we are thrilled that about 2,400 families that have been reunited.”

Gelernt discussed the “gratuitous cruelty” that characterized the separations as well as concerns about the long-term impact of the separations on the children’s mental and physical health. “When you’re a child, the reason you don’t feel constantly vulnerable and scared is that you think your parents are all powerful,” he said. “When children were taken away, they realized, ‘My parent can’t protect me—he or she is not all powerful.’ That sense of vulnerability may last for a lifetime.”

Gelernt also directs the Immigrants’ Rights Project’s Access to the Courts Program. In 2017, he successfully argued the first case challenging President Trump’s travel ban on individuals from certain Muslim-majority nations. That case resulted in a federal court in Brooklyn issuing a nationwide Saturday night injunction against the ban one day after the President enacted it and eight days after his inauguration. 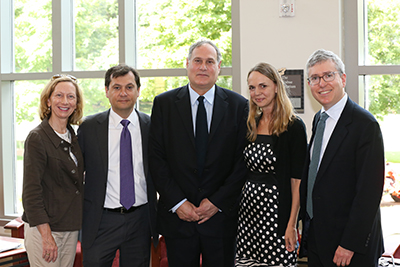