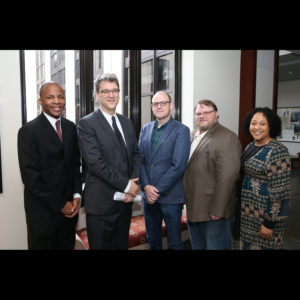 Can lawyers use their legal training to help out in emergencies? And if so, how? Three Nashville-based attorneys discussed how lawyers can put their legal skills to work in a Feb. 24 panel discussion, “Emergency Lawyering Training: First Responder Lawyers in Extreme Situations,” moderated by Associate Dean Christopher Serkin. 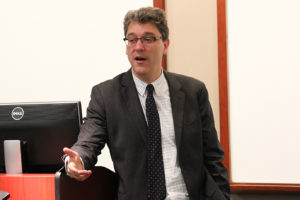 Serkin had the idea for the panel, which addressed immigration, civil rights and election issues, after hearing about the help volunteer lawyers provided travelers detained at New York’s John F. Kennedy International Airport after President Donald Trump announced a travel ban and immigration freeze in January 2017. “I found myself thinking about how I would respond and what professional obligations lawyers have in such situations,” Serkin said. 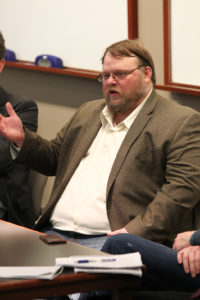 Castelli highlighted a case brought by the ACLU of Tennessee in 2011 after Occupy Nashville protesters encamped on Legislature Plaza were arrested in the middle of the night under new rules enacted by state officials in a secret meeting, which established a curfew and required that protesters pay use and security fees and get liability insurance in advance. “The immediate concern was that all these people were getting arrested, so how can you help in the moment,” Castelli said. “Lawyers went down to the country jail in the middle of the night to represent these people in bail hearings, and they were able to argue that bail shouldn’t be set. The night commissioner dismissed cases, and people just walked out–lawyers being there really made a difference.”

The ACLU of Tennessee also immediately filed a lawsuit on behalf of the protesters, and a federal judge issued a temporary restraining order stopping the state from enforcing the new rules. In June 2013, the judge ruled that the arrest of the protesters was an unconstitutional violation of their First Amendment rights.

Free described a case in which immigrants were informed that Immigration and Customs Enforcement (ICE) officers were planning to raid their apartment complex. “When we got to the complex, we saw people throwing all of their belongings in cars and trucks and leaving. There was a visceral sense of crisis and fear,” Free recalled. “We went about the process of fact checking and establishing whether people were actually vulnerable.”

The lawyers discovered that the apartment complex’s owners were using the threat of an ICE enforcement action to remove existing tenants to end their leases. The complex was fined by the U.S. Department of Housing and Urban Development for its unlawful action. “When you see people being shut out of the U.S. who have valid visas, that prompts us to want to do something,” Free said.

Odubeko encouraged attorneys to volunteer at polling places, which he has done since starting his legal career. “Too often, lawyers feel they are confined to their desks,” he said. “You can put your legal skills to use in the area of election law.” As a poll observer, Odubeko has informed people of their right to be provided a provisional ballot and helped ensure that polls remained open to accommodate voters at precincts that lacked an adequate number of voting machines or opened late.

“In 2002, Congress passed the Help America Vote Act, and that completely changed the landscape in terms of issues at the ballot box. If someone is being told they’re at the wrong polling location or have to show an ID, they have a right to cast a provisional ballot,” Odubeko said. Lawyers monitoring polls can also ensure that voters aren’t intimdated and that restrictions regarding campaigning near the entrances of polling places are observed, he noted.

While Serkin cautioned the law students that they cannot engage in the unauthorized practice of law until they pass the bar, he also encouraged them that their legal training already allows them to identify problems, connect to available legal resources, and speak with clarity and authority to people who may be in a position to help.