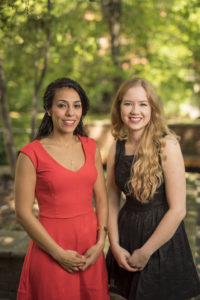 Marian Mikhail and Carly Myers, both 2017 Vanderbilt Law graduates, have been named George Barrett Social Justice Fellows for 2017-18. The one-year fellowships are awarded annually to up to two members of the graduating class who plan to launch careers in the public interest.

Their fellowship appointments were announced by Dean Chris Guthrie.

In an application process similar to the prestigious Skadden Fellowships, applicants for the Barrett Fellowship propose one-year projects at a legal nonprofit organization. Mikhail will spend her year at The Bronx Defenders in New York; Myers will move to Berkeley, California, to work at the Disability Rights Education and Defense Fund. Their one-year fellowships pay their full salaries and benefits at the sponsoring organization.

“Carly Myers and Marian Mikhail will be capable and passionate advocates for the low-income clients both will serve, and they both proposed innovative projects that meet important, unmet needs,” Dean Guthrie said. “I look forward to the contributions they will make at Bronx Defenders and the Disability Rights Education and Defense Fund, and the good work they will do throughout their careers.”

At Bronx Defenders, Mikhail will develop a new program advocating for low-income people facing criminal charges whose drivers’ licenses are suspended or revoked for offenses that do not involve a vehicle. “Losing a driver’s license affects everything—economic livelihood, child- and parental care, and professional and personal responsibilities,” Mikhail said. “Some people choose a criminal conviction over a license revocation to prevent their lives from being unraveled.” She believes the knowledge she gains while serving as a liaison between the Bronx Defenders and the New York Department of Motor Vehicles will enable the organization to increase both resources and services available to its indigent clients and help more clients regain their licenses or avoid losing them.

Myers will advocate for low-income people with disabilities who face legal barriers to accessing mobility aids, such as wheelchairs, at the Disability Rights Education and Defense Fund. The idea for her fellowship came from her work on behalf of several clients with disabilities, including a four-year-old girl who needed a walker, as a legal intern at DREDF during summer 2016. “Long delays are common with both public and private health insurance plans,” Myers said. “This is particularly devastating for children, who often have already outgrown the equipment by the time they receive it.” She also advocated for a 40-year-old man with spina bifida who needed a wheelchair powerful enough for outdoor use. “Many plans cover only mobility equipment for use inside your house, denying people access to employment, education, and community involvement outside their home,” she said.

Myers served as Conventions Editor of the Vanderbilt Law Review and was the top contributor of pro bono hours for the Class of 2017. She received the Bennett Douglas Bell Memorial Prize at commencement, awarded to “the student of the senior law class who is not only well-versed in the law, but who shows the highest conception of the ethics of the profession.” She earned her undergraduate degree at the University of Florida. During law school, she interned with the Legal Aid Society of Middle Tennessee and the Cumberlands during fall semester 2016, with DREDF in summer 2016, with Disability Rights Tennessee during spring 2016, and with the Tennessee Justice Center during summer 2015.