The summer after her 1L year, Marisa Papenfuss made a surprising discovery while working in Washington, D.C., as a legal intern in the Enforcement Division of the U.S. Securities and Exchange Commission: She loved securities law. “Securities laws touch every facet of the markets,” she said. “That really fascinated me.”

Her interest was confirmed the following summer, when she focused on securities and white-collar defense cases while working at Paul, Weiss in New York. “Seeing securities cases from the other side was really interesting,” she said. By summer’s end, Marisa had accepted a permanent position with the firm as a litigation associate starting in 2020.

Marisa included Vanderbilt among the 11 law schools to which she applied because of its record of national placement and its culture. “I wanted the option to go anywhere in the country, and I knew Vanderbilt would be a great springboard for my career,” she said. “Once I started touring law schools, I found I could get a sense of ‘fit’ quickly. I was probably on the Vanderbilt campus for 20 minutes before I decided VLS was my school. The students I met were intelligent, fun, interesting and compassionate, and I knew I would get a great legal education and enjoy my time here.”

As a college English major, Marisa was used to heavy reading and writing assignments but found her first law classes “the most intellectually rigorous experience of my life.” However, she gained confidence as her first semester progressed. “I started law school with a major case of imposter syndrome—I was straight out of undergrad, had no job experience and was surrounded by incredibly impressive people. But I realized we were all on a level playing field when a classmate with several graduate degrees and years of work experience approached me after class and asked me if I had understood a point the professor had just made. I hadn’t. But this single interaction helped me realize that nothing really prepares you for law school.”

As a 1L, Marisa joined the Ambassadors—students who help with alumni events and student recruitment—and helped produce the Obiter Dictum, a student-edited guide to VLS and Nashville that all incoming law students receive. Her 2L year, she joined the editorial staffs of Vanderbilt Law Review, which publishes scholarly works by legal academics, and the Environmental Law and Policy Annual Review, which produces an annual compendium of the best environmental law scholarship published in scholarly journals the previous year. “Professors (Mike) Vandenbergh and (Linda) Breggin are faculty advisers for ELPAR, and they became mentors inside and outside the classroom,” she said. “We celebrated Thanksgiving at their house this year.”

Marisa served as ELPAR’s Executive Editor her 3L year. “I learned so much from my time on ELPAR about environmental law, about good legal scholarship, and about management, group dynamics and problem solving,” she said. “My proudest moment was when we had our annual orientation in a cabin at Percy Warner Park. Our new members immediately clicked with the current members. ELPAR just tends to attract fun, outgoing, intelligent people.”

Her Vanderbilt Law Review Note, “Inflated Private Offering: Regulating Corporate Insiders and Market-Moving Disclosures on Social Media,” was published in January. “I argue that social media’s incompatibility with the SEC’s Regulation Fair Disclosure has a chilling effect on corporate speech that will only get worse as technological innovation continues,” she said.

Marisa credits Vanderbilt’s Career Services department for encouraging her to consider the SEC internship that helped her get a job she is genuinely excited about. “The greatest discovery I made in law school is that lawyers never stop learning,” she said. “During my 1L summer at the SEC, I was given an assignment to work on with a staff attorney. I was shocked when I walked into his office and he said, ‘I really have no idea how to do this. Want to sit here and figure it out with me?’ We spent hours flipping through the text of the Exchange Act to see how we could fit the conduct we were investigating into a specific charge.”

While she looks forward to starting work, she acknowledges that she will miss the collegial Vanderbilt Law community. “Starting on the first day of law school orientation, I met some of my closest friends here,” she said. “The word ‘collegial’ really is the best way to describe the Vanderbilt Law community. You sense it as soon as you walk into the building. The smaller class size lends itself to a close-knit community, and people are kind to each other here.” 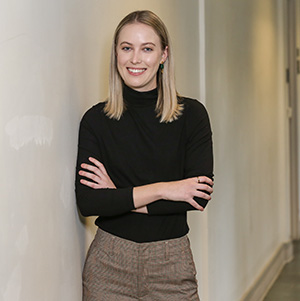