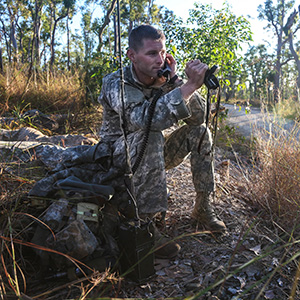 Matthew Fitzgerald ’20, a captain in the U.S. Army JAG Corps, has won the 2020 Rear Admiral John S. Jenkins Writing Award for his essay, “Thank Me for My Service: An Ethics Oversight in DoD Social Media Policy.” The paper, which Fitzgerald wrote as an independent study project under the supervision of Professor of the Practice of Law Michael A. Newton, has been accepted for publication in the Harvard National Security Law Journal.

Federal ethics rules preclude most servicemembers from using their public positions for private pecuniary gain. However, Fitzgerald identified several common models in which servicemembers engage in profit-generating ventures by producing and posting content related to their military service on social media platforms. Examples cited in his paper include servicemembers endorsing dietary supplements and other products, advertising personal modeling services while in military uniform, and representing apparel brands in exchange for compensation.

“The current DoD policy regime is ill-equipped to address these for-profit ventures,” he concluded.

“Matt identified a gaping flaw in the current ethics guidance that is hiding in plain sight,” Newton said. “His intellectual effort is directly linked to the necessity for fielding mission-capable and cohesive units across the armed forces. He documented the scope of the problem and offered solutions that are already beginning to bear fruit in the form of reframed DoD guidance.”

In announcing Fitzgerald’s award, the NIMJ stated: “Standards of conduct promulgated by U.S. Office of Government Ethics and the Department of Defense purport to forbid servicemembers from calling attention to their military identities for commercial gain, but today on social media, service members commonly act as influencers in return for kickbacks or commissions. Mr. Fitzgerald has collected a large body of evidence showing that violations of the relevant ethical standards are widespread…. His essay is both a ‘heads up’ and a call for action.”

Fitzgerald earned his B.S. at the U.S. Military Academy at West Point and attended law school at Vanderbilt through the Army’s Funded Legal Education Program. He currently serves as a military justice advisor in the 10th Mountain Division at Fort Drum, New York.

The Rear Admiral John S. Jenkins Writing Award, named in honor of the co-founder of the National Institute of Military Justice, is presented annually to the best nominated paper written by a law student on a military legal topic.