After earning her undergraduate degree, Natalie Komrovsky worked as a project manager for a translation company in Boston before moving to Russia to work for a nonprofit serving orphans and as an editor and translator for a Russian investment bank. When she decided to return to the U.S. to earn a J.D., she had to fly to Armenia to take the LSAT. “My path to Vanderbilt was unusual,” she said.

Natalie had majored in history and Russian at Middlebury College, which she had chosen based on its small size and collegial community, and she hoped to find a similar fit for law school. “I was looking for a smaller school where I could get to know my peers and my professors,” she recalled. “Lots of people told me I should look at Vanderbilt.”

Natalie found Vanderbilt academically challenging. “The 1L curriculum was quite rigorous,” she said. “I worked for several years between college and law school, and I’d forgotten how exhausting it is to learn new things every single day. For the first two weeks of my 1L year, I had to come home and take a nap after my last class every day.”

The fact that she found her classes engaging and compelling helped Natalie hit her stride. “I had, across the board, phenomenal professors,” she said. “My 1L professors understood exactly what we didn’t understand and were able to break things down for us in ways that made really complicated subjects understandable. Professor Wuerth (Civil Procedure) and Professor Sitaraman (Regulatory State) were somehow able to lead us to conclusions using only the Socratic method; they guided the class in the right direction just by asking questions and never seemed to get tripped up when we gave wrong or surprising answers. It was remarkable.”

Natalie joined the staff of the Vanderbilt Law Review as a 2L. “I learned so much about the law through my work on the articles committee for the Law Review. Reading tons of articles showed me how many interesting nuances there are in the law, and it also helped me become a better writer,” she said.

She also joined the National Moot Court team. “Moot Court is a ton of work but it’s really satisfying,” she said. “Our coach, Mark Pickrell, is a very accomplished appellate lawyer, and I learned a lot from him. I felt very close to my teammates–you spend a LOT of time together in the weeks before the competition, and you learn so much about a legal issue. Moot Court helped me realize that in real life, issues come up that involve many different areas of the law. Nothing exists in a vacuum.”

Her first summer as an intern at the Securities and Exchange Commission helped her rule out financial regulation as a career option. After serving as judicial clerk on the Sixth Circuit Court of Appeals, Natalie will join Williams & Connolly in Washington, D.C. She first interviewed with the firm at Vanderbilt’s D.C. job fair.

Her most surprising discovery: “That I could be hired for a job five years in advance!” Natalie said. In summer 2018, she was hired for a clerkship with Judge Richard J. Leon on the U.S. District Court for the District of Columbia that she will serve in 2023-24.

“Vanderbilt Law is challenging but supportive,” she said. “Students here genuinely want to see everyone succeed, everyone is friendly, and because we’re small, it’s easy to get to know people. I loved my experience here.” 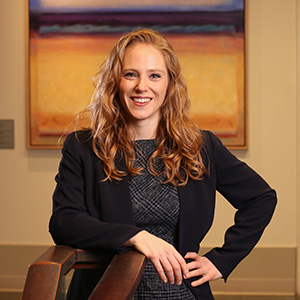