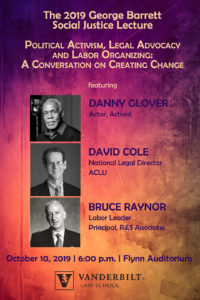 The discussion, sponsored by Vanderbilt’s George Barrett Social Justice Program, will feature three speakers who have taken very different routes to effectuating social change – social activism, law, and labor organizing.   Tickets to the event, which is free and open to law students and the Vanderbilt community, will be offered on a first-come, first served basis. A limited number of tickets for the Vanderbilt community will be available here on Wednesday, September 25, starting at 12:15 p.m.

Danny Glover is an award-winning actor and producer with a performance career that spans more than 30 years. Star of the blockbuster Lethal Weapon films as well as hit television shows such as ER, Glover distinguished himself as one of the top actors of his generation. Off-screen, he has gained respect for his community activism and philanthropic efforts. He has served as a Goodwill Ambassador for the United Nations Development Program, focusing on issues of poverty, disease and economic development in Africa, Latin America and the Caribbean, and he currently serves as UNICEF Ambassador.

As national legal director for the American Civil Liberties Union, David Cole leads a program that includes approximately 1,400 state and federal lawsuits on a broad range of civil liberties issues and oversees the organization’s U.S. Supreme Court docket. Cole has litigated many constitutional cases in the Supreme Court, including Texas v. Johnson and United States v. Eichman, which extended First Amendment protection to flag burning; National Endowment for the Arts v. Finley, which challenged political content restriction on NEA funding; and Masterpiece Cakeshop v. Colorado Civil Rights Commission, in which the ACLU represented a gay couple refused service by a bakery because they sought a cake to celebrate their wedding. His victories include challenging restrictions on federally funded AIDS education, obtaining an injunction against Randall Terry and Operation Rescue for blocking access to abortion providers, and freeing several Arab and Muslim immigrants detained on secret evidence. Cole began his career at the Center for Constitutional Rights and litigated many of these cases in cooperation with ACLU attorneys.

Bruce Raynor is the principal of the New York-based consulting firm R&S Associates, where he works with financial organizations on labor friendly policies and advises unions on capital strategies and organizing campaigns. One of the most respected labor leaders in America, Raynor has served as president of the garment workers union UNITE, and UNITE HERE, the merger between the national garment union and the hotel and casino union, and as vice president of the AFL-CIO . He was a founding member of Change To Win, a separate labor federation of six million workers. Raynor is president emeritus of Workers United, SEIU.

The George Barrett Social Justice Program sponsors an annual lecture addressing social justice topics. The program was endowed by in 2016 by Darren Robbins ’93 in honor of his friend and mentor, the noted civil rights attorney “Citizen” George Barrett ’57, whose legacy of social justice advocacy included Geier v. Tennessee, which resulted in the desegregation of Tennessee’s state universities. Barrett died in 2014 at age 86. The program endowed in his honor offers courses, clinics, a reading group, stipends to help students with living expenses for summer work in the public interest, and a fellowship program that enables graduates to launch public interest careers.