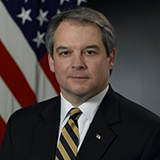 Paul Ney, JD/MBA ’84, has been nominated to become general counsel of the U.S. Department of Defense.

Ney’s nomination was announced by the White House Jan. 8 and is subject to Senate confirmation.

Ney has served as chief deputy attorney general in the Tennessee Attorney General’s Office since September 2016. Before that, he was a partner in Patterson Intellectual Property Law in Nashville for six years.

Ney earned his undergraduate degree at Cornell University before earning his J.D. and MBA at Vanderbilt. He was a judicial clerk to Judge Adrian Duplantier of the U.S. District Court for the Eastern District of Louisiana after law school.