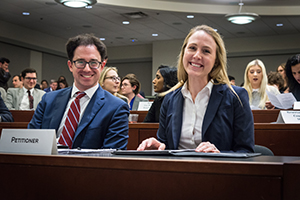 Under the leadership of Vanderbilt Moot Court Board Chief Justice Natalie Pike ’19, Executive Justice Ahsin Azim ’19 managed a team of third-year students who organized and ran the competition. 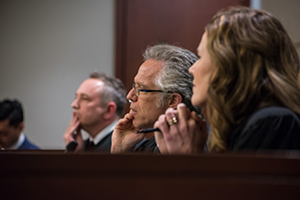 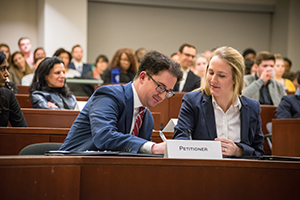 The problem, written by executive problem editor Caroline Barnett ’19 and associate problem editors Sam Heller ’19 and Ian Joyce ’19, followed the appeal of West Hugo v. Burgundy. Jean Burgundy, a gay activist who also worked for anti-gun and women’s rights groups, was convicted of violating the State of West Hugo’s concealed-carry restriction on handguns after a pistol was discovered in a backpack in his possession. Burgundy had been denied a concealed-carry permit by the State of West Hugo after state regulators determined that his fear for his personal safety as a gay activist did not meet its standard of “undeniable need” for concealed carry. He was sentenced to three years in prison for violating West Hugo’s concealed-carry statute. During voir dire in Burgundy’s case, two openly gay potential jurors were removed by peremptory challenges. Burgundy’s appeal before the Supreme Court addressed two issues: Whether the State of West Hugo’s requirement that an individual prove “undeniable need” for concealed carry of firearms before the state would grant a permit violated the Second Amendment, and whether the use of peremptory challenges to strike jurors on the basis of sexual orientation violated the Fourteenth Amendment.

The John A. Cortner Award, which goes to the winners of Vanderbilt’s annual Bass Berry & Sims Moot Court competition, honors John Cortner ’85, who served as the Moot Court Board’s chief justice. Cortner joined Bogle & Gates in Seattle after graduation, but was diagnosed with Hodgkin’s disease soon after and died within the year. His family endowed the award in 1988 in his memory.