Rana DiOrio ’91 was inspired to found Little Pickle Press by her three children.

When President Barack Obama was elected in 2008, Rana DiOrio ’91 found herself “trying to explain the enormity of that historical milestone” to her young children. But the mother of three couldn’t find the tools to do it.

So DiOrio wrote a book to explain diversity, intended only for her two daughters and son. “I honestly had no aspirations to get it published,” she recalled, as she had spent the previous 17 years as a corporate securities attorney, software investment banker, mergers and acquisitions banker, real estate investor and developer, and private equity investor based in the Bay Area. Her first book, What Does It Mean to Be Global?, was soon followed by a second, What Does It Mean to Be Green? To her delight, DiOrio discovered that writing the children’s books “allowed me to turn all of my cajoling—all those reminders about turning off the water and the lights and wearing your pajamas a second time—into a construct.” 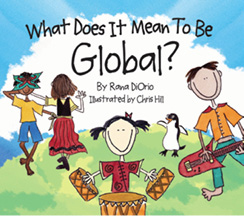 When she showed her books to other parents and friends, she received universally positive feedback: They were unlike anything else on the market. That spurred DiOrio to seek a publisher, but she soon found herself stymied by her inability to find a company that would print her books on recycled paper using soy inks. “I felt as though we needed to answer the question ‘What Does It Mean to Be Green?’ with an environmentally friendly publishing process,” she said. For DiOrio, the next logical step was to found a socially responsible children’s media company.

Now in its sixth year, San Francisco-based Little Pickle Press has increased its catalog of “meaningful books and media for children” to 15 titles and its offerings from print editions to enhanced eBooks, book apps and music. DiOrio also points with pride at Little Pickle’s designation as a B Corp “Best for the World” organization for meeting rigorous standards of social and environmental performance, accountability and transparency. In 2013, Little Pickle was recognized as ForeWord Reviews’ Independent Publisher of the Year, and DiOrio now serves on the executive committee of the board of the Independent Book Publishers Association. Her journey as Little Pickle’s founder also brought another unexpected adventure: DiOrio was one of 12 mothers who traveled to Ethiopia with Bono’s ONE Campaign, a humanitarian organization that works to end extreme poverty and preventable disease.

None of these accolades, however, meant as much to DiOrio as a conversation she had with her 10-year-old daughter, Ryan. “She showed me an essay she had written,” said DiOrio. “She had read R.J. Palacio’s book, Wonder, about a boy with a facial genetic disorder that could have made him an outcast, and she said, ‘Wouldn’t it be amazing if the whole world had the acceptance there is at the end of this story?’” After DiOrio casually mentioned the comment to a friend, Ryan’s essay was posted on the ONE website. 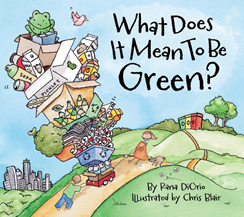 “The lovely précis of this story is the power of altruism,” DiOrio said. “I think I am leading by example. With great humility and self-awareness, I am modeling the kind of values I would love for my children and other children to have. So yes, it’s working.”

Having stepped away from a lucrative career as an attorney and investment banker, DiOrio has learned to live more frugally. But her legal experience helped her deal with what she describes as the “bajillion contracts that have to be reviewed and drafted when you’re starting a company,” and her financial acumen helped her choose her development partners wisely.

“Law has been and continues to be a valuable experience that I’m able to apply on a daily basis as an entrepreneur,” she said. “A legal education teaches you how to critically analyze and solve problems and to articulate your position in a crisp, clear and compelling way. These skills are broadly applicable to just about anything, but especially to business.”  DiOrio remembers her law school days with fondness and gratitude.

She serves on the Board of Advisors and for the past several years has funded a scholarship earmarked for third-year law students considering career paths other than private legal practice. “I feel incredibly grateful to have attended Vanderbilt,” she said. “I am extraordinarily indebted to that institution for shaping me into the adult I have ultimately become. One reason I’m running a social mission company is to pay that debt of gratitude for the experience and exposure. I want to help shape the future leaders of our global community, which is why we do what we do at Little Pickle Press—our media is designed to raise the consciousness of children so they will become socially responsible leaders—and I definitely tie that back to Vanderbilt.”