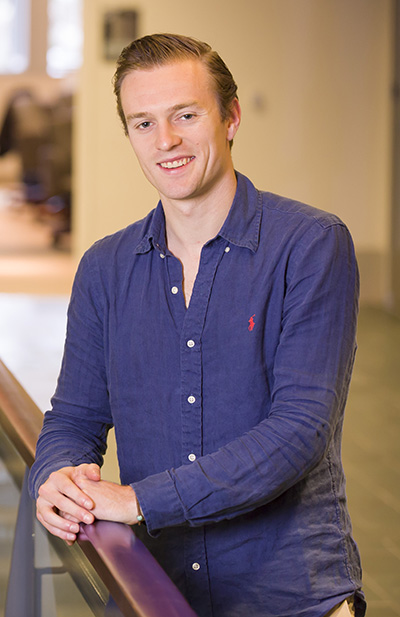 Steve Nuyts earned both his LL.B. and an LL.M. in business and corporate law at the University of Antwerp while playing second-division professional soccer. His soccer commitment—five hours of practice every weekday and games every weekend—meant that “I never had the chance to study abroad.”

So when Nuyts finished his LL.M. he decided to spend a year earning an LL.M. in the U.S. “I wanted to gain more knowledge about American business law, and I believed that lawyers who can use multiple approaches to tackle legal issues will probably achieve better results for their clients,” he said.

Nuyts, who knew he wanted to focus on private equity and corporate transactions, was particularly interested in studying U.S. and international corporate and financial regulation in the wake of the 2008 global financial crisis. He found his courses in Securities Regulation from Professor Yesha Yadav, a British national who worked for the World Bank before becoming a law professor; Regulation of Financial Institutions from Professor Morgan Ricks, who worked for the Obama administration as a policy adviser following the global financial crisis; and Corporations with Professor Margaret Blair, an economist, extremely relevant to his interests and career goals. “Professor Ricks is an excellent professor with a lot of practical experience,” he said. “Professor Yadav was an awesome professor to have for Securities Regulation, and Professor Blair is a wonderful person. I learned a lot about the policies behind the law from all of them.”

Nuyts also appreciated the opportunity to take a short course, Corporate Governance, from Justice Randy Holland of the Delaware Supreme Court. “Delaware is the world’s leading actor in dealing with public company issues, and their case law has inspired new laws in several countries,” he said. “Taking a class from Justice Holland was an amazing opportunity.”

Now, as an associate in the corporate finance department at Baker & McKenzie Brussels, “My LL.M. experiences contribute to my work daily,” Nuyts said. “Almost all documents need to be drafted in Dutch and English, therefore I really benefit from a legal English education. A big part of my work now involves assisting in corporate reorganizations—for example, an international corporation wants to reorganize its corporate structure by merging its foreign subsidiary with its Belgian subsidiary. Sometimes I’m involved in securities transaction, like drafting a call option agreement in a private equity context.”

Nuyts chose Vanderbilt both because of its academic reputation and its Nashville location. “I wanted the real American experience,” he said. “I loved the music, the people and the Predators [Nashville’s professional ice hockey team] in Nashville. I met a bunch of wonderful people—LL.M.s and J.D.s. I’d definitely recommend Vanderbilt—you have a chance to learn from excellent professors while joining the courses with J.D. students—and you also have the chance to explore a fast-growing, exciting city.”