The Original Sin of Banking Law

Morgan Ricks explains the genesis of his book, The Money Problem, which offers a simple solution to the problem created by short-term borrowing.

In 2009 I joined the U.S. Treasury Department as a member of the Crisis Response Team, a small group of Wall Street professionals—investment bankers, traders and buyout specialists—whom Secretary Timothy Geithner had brought on board to help engineer the Obama administration’s response to the financial crisis. That fall, with the financial system in fairly stable condition, Geithner asked us to turn our attention from financial rescue to financial reform. The team gathered one afternoon to review some ideas.

We quickly found ourselves converging on a single issue. We called it “shadow banking.” That term has come to mean different things to different people. In fact, it has become so vague as to render it almost meaningless. To us, though, the term meant something quite specific. When we talked about shadow banking, we were referring to the financial system’s use of vast amounts of short-term debt to fund portfolios of financial assets.

The short-term funding markets are enormous, but they are fairly obscure. They exist largely in the background, as part of what might be called the “operating system” of modern finance. These markets have weird names—like repo, Eurodollars and asset-backed commercial paper—but this confusing terminology belies their simplicity. These markets are not exotic. They are simple as can be: They are just short-term debt. Borrowings from these markets mature very soon, often in a single day. Financial institutions that rely on these markets typically must continually renew (or “roll over”) large quantities of short-term borrowings. Failing to do so on any given day would result in the immediate default or collapse of the firm.

In 2007 and 2008 the short-term funding markets unraveled in dramatic fashion. The unraveling started in mid-2007 with the failures of a number of big investment conduits that relied heavily on short-term borrowing. The following spring the crisis spread to the giant repo market—a multitrillion-dollar market in which Wall Street firms finance their securities portfolios on a very short-term basis, typically overnight. Bear Stearns, a major investment bank, collapsed that spring when it lost access to overnight repo funding. Finally, with the bankruptcy of Lehman Brothers in the fall of 2008, all the short-term funding markets seized up at once. Many key financial markets stopped functioning. The economy promptly went into free fall. Governments in the United States and abroad launched massive financial rescue operations. With few exceptions, these measures were aimed at stabilizing short-term markets.

To our team at Treasury, the short-term funding markets seemed dysfunctional; they were prone to damaging panics. By no means did we think shadow banking was the only problem with the financial system. But our sense was that the fragility of the short-term funding markets was a central problem—perhaps the central problem—for financial security policy. Any serious program for financial reform, we thought, should address this area directly. In fact, we believed that a coherent regulatory approach to shadow banking might go a long way toward addressing other major issues, such as the vexing “too big to fail” problem. But what if anything should be done? 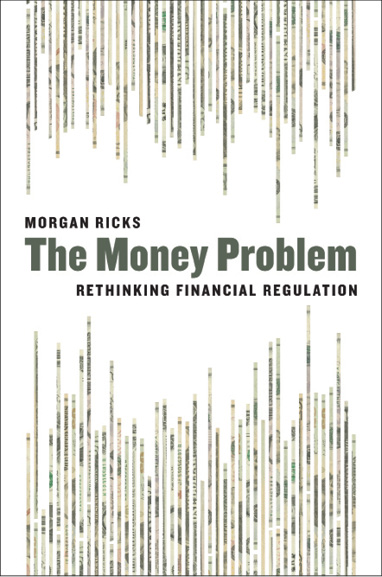 Over the subsequent months, the financial reform process went in a very different direction. July 2010 saw the enactment of the Dodd-Frank Act, which was intended to address the root causes of the financial crisis and prevent a recurrence. It was a massive piece of legislation. But the new law left the short-term funding markets practically untouched.

In 2010, I left government service to teach law and conduct research in the area of financial stability. In my book, The Money Problem: Rethinking Financial Regulation, published this year by the University of Chicago Press, I make the case that, when it comes to financial stability policy, panics—widespread redemptions of the financial sector’s short-term debt—are the main problem, and that panic-proofing should be the central objective of financial stability policy. I show that the use of large quantities of short-term debt is, in effect, a form of money creation by nonsovereign entities. Then, I offer a blueprint for a revamped money and banking framework that represents a modernization of the existing U.S. system of money and banking along functional lines. Under the system I describe, money creation would be a sovereign prerogative.

This monetary-financial system would not only be simpler and require less regulation; it would also be panic-proof, because the funding of portfolios of financial assets with large quantities of defaultable short-term debt would no longer exist on any meaningful scale. By implementing a direct and structural approach to short-term debt funding, we could set the stage for a substantial scaling-back of our existing hypertechnical financial stability apparatus.

While my novel take on the shadow-banking problem sounds radical, it is actually fairly conservative. It would confine money creation, including the creation of cash equivalents, to the government itself and to existing banking entities. This means implementing a general prohibition on a particular funding model: The use of large quantities of short-term debt, continuously rolled over, would be off-limits for any entity other than a chartered bank.

The failure to reach a functional legal specification of what constitutes money is the original sin of banking law. It has allowed money creation to bypass our system of sovereign control. The solution I propose would rectify that.

Associate Professor of Law Morgan Ricks was a senior policy adviser and financial restructuring expert at the U.S. Department of the Treasury before joining the legal academy. His first book, The Money Problem: Rethinking Financial Regulation, outlines a way to “panic-proof” the economy. This essay was condensed from the book’s introduction.