Three members of Class of 1994 take the bench 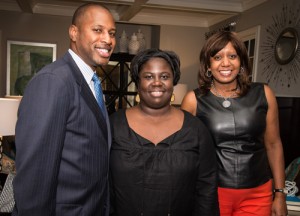 Three members of the Class of 1994 — Tamara Ashford, Rupert Byrdsong and Sheila Calloway (BA’91) have been appointed or elected to judgeships.

Tamara W. Ashford was nominated in September 2013 by President Barack Obama to a 15-year term on the U.S. Tax Court in Washington, D.C. Ashford currently serves as the deputy assistant attorney general for appellate and review in the Department of Justice’s Tax Division. The Senate Finance Committee has unanimously approved her nomination, and she is awaiting Senate confirmation.

Rupert A. Byrdsong was appointed a judgeship in the Los Angeles County Superior Court by California Governor Edmund G. Brown Jr. on June 18. Judge Byrdsong had been an attorney at Ivie McNeill & Wyatt since 1995 and became a partner with the firm in 2001. He filled the vacancy created by the conversion of a court commissioner position on August 12, 2013.

Sheila Calloway was elected to a seat on Metropolitan Nashville and Davidson County’s Juvenile Court. Judge Calloway, who teaches Trial Advocacy as a member of Vanderbilt’s adjunct law faculty, previously served as a juvenile court magistrate in Nashville. She currently serves is co-chair of the Health and Public Services Academy Partnership Council with the Nashville Public Schools and is a member of the Tennessee Supreme Court’s Court Improvement Project and the Davidson County Disproportionate Contact Task Force. After earning her law degree at Vanderbilt, Judge Calloway worked at the Metropolitan Nashville Public Defender’s Office in both the adult and juvenile systems before her appointment to the position of juvenile court magistrate in 2004.