Tracey George has been appointed to the newly endowed Charles B. Cox III and Lucy D. Cox Family Chair in Law and Liberty.

George, who previously held the Tarkington Chair of Teaching Excellence, has served as director of the law school’s Cecil D. Branstetter Litigation and Dispute Resolution Program since 2010.

After law school, George clerked for Judge Francis D. Murnaghan Jr. of the U.S. Court of Appeals for the Fourth Circuit and then joined the Washington, D.C., firm Miller Cassidy Larroca & Lewin, which specialized in white collar criminal defense, government investigations and complex civil litigation. Her first teaching post was at the University of Missouri in Columbia from 1996 to 2001. She then joined the Northwestern University faculty as a tenured professor in 2001, holding the Benjamin Mazur Research Professorship from 2002 through 2003. She joined Vanderbilt in 2003.

George is among the nation’s leading scholars in the fields of judicial politics, the empirical study of litigation in Article III courts, and legal education. Her work is characterized both by the polish of her writing and the rigor of her empirical methodology. George’s work has been published in the American Political Science Review, Journal of Empirical Legal Studies, North Carolina Law Review, Northwestern University Law Review, Duke Law Journal, Supreme Court Economic Review and Vanderbilt Law Review, among others. 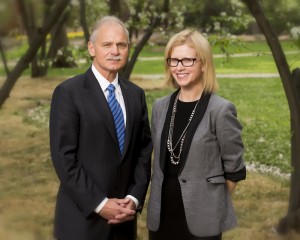 George is also an award-winning professor, having won the Hall-Hartman Outstanding Teaching Award four times in addition to receiving comparable prizes at Northwestern University Law School and the University of Missouri Law School. She and colleague Suzanna Sherry created The Life of the Law, a required class for all incoming J.D. and LL.M. students, and co-authored the course textbook, What Every Law Student Really Needs to Know: An Introduction to the Study of Law (Aspen, 2009). George also has written a contracts casebook and statutory supplement, K: A Common Law Approach to Contract Law (Aspen, 2012), with UCLA Law Professor Russell Korobkin.

The Charles B. Cox III and Lucy D. Cox Family Chair in Law and Liberty was endowed with a $1.5 million gift by Charles B. (Charlie) Cox III ’75 and his wife, Lucy, in honor of their family, which includes daughter, Allie Cox ’11, a public defender in Chicago, and sons Charles and David Cox. Cox founded Lightning Trading, an options trading firm, in 2005. Cox has been a member of the Chicago Board Options Exchange since 1978 and is a past chairman of the CBOE Arbitration Committee, which adjudicates disputes between the exchange’s members. He currently serves on the law school’s alumni Board of Advisors. Before he began his career as an options trader, Cox worked for the Federal Trade Commission in Washington, D.C. He has financially backed more than 50 traders, including his son David.

Cox was led to endow the Charles B. Cox III and Lucy D. Cox Family Chair in Law and Liberty by his deep appreciation of the skill and commitment required to be an excellent teacher and mentor. “In our Board of Advisors meetings, Dean Guthrie emphasizes the importance of a great faculty,” Cox said, “and one way to keep a great faculty is to endow chairs.”

“I’m honored to be the inaugural holder of the Cox Chair and extremely grateful to Charlie Cox and his family supporting the law school and its faculty in this meaningful way,” George said. “I look forward to continuing my teaching and research here at Vanderbilt.”

“Professor George has advanced our understanding of federal courts in innumerable ways, giving us a more satisfying empirical sense of judges and judging and allowing theory to develop on a more solid foundation,” said Lisa Bressman, associate dean for academic affairs, who holds the David Daniels Allen Distinguished Chair of Law. “At the same time, she has shown deep commitment to teaching, winning repeated awards for her teaching and producing materials to help all law students better grasp Contracts, in particular, and to master law school, in general. She is truly remarkable, and it is fitting that she is recognized for her success the inaugural holder of this generous chair.”