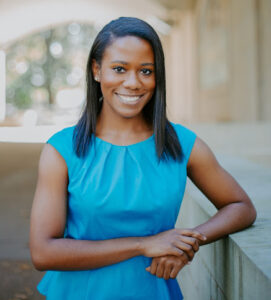 Vel Lewis has been named a 2021 George Barrett Social Justice Fellow. Lewis will serve her one-year fellowship with the United Nations High Commissioner for Refugees in Washington, D.C., where she will serve in the U.S. Protection and Solutions Unit.

Lewis is one of two 2021 George Barrett Social Fellows. Her classmate Allen King will work as a Barrett Fellow for Tennessee Justice for Our Neighbors, a Nashville-based nonprofit that provides free or low-cost immigration legal services.

Lewis will work with the Protection and Solutions legal team on such issues as border operations and refugee resettlement under the direction of PSU Legal Officer Alice Farmer, who leads the U.S. legal team. The Protection and Solutions Unit serves asylum seekers, refugees and stateless persons in the United States. Its U.S. legal team provide comments on proposed legislation and regulations, submits amicus briefs on select international legal issues and monitors U.S. government compliance with international standards to ensure that U.S. law and policy is aligned with international refugee law.

Lewis became interested in the plight of immigrants and refugees after her home state, Alabama, passed law restricting immigration. “I remember the effect these oppressive anti-immigration laws had on many of my friends and classmates who were forced to leave the state on short notice,” she said. After college, she worked in Marseille, France, teaching English to recent immigrants. “I wanted to assist these students in their journey to receive the protections granted them in new countries. My time in France was critical to my decision to attend law school and my interest in international human rights,” she said.

She chose Vanderbilt Law School for its strong Public Interest and International Law programs. She spent two semesters working in the Immigration Practice Clinic, served as president of the Immigration Law Society, and logged 654 hours of pro bono work with the Tennessee Immigrant & Refugee Rights Coalition, Tennessee Justice for Our Neighbors, and other nonprofit and advocacy organizations.

“Vel has demonstrated extraordinary commitment to pursuing a career in human rights and refugee protections. We are thrilled that she will serve as a Barrett fellow with UNHCR working to ensure that vulnerable migrants and refugees are treated in accordance with international norms,” Miller said.

Lewis will move to Washington to begin her fellowship year in August.