Vanderbilt’s two ABA Moot Court teams advanced to the quarterfinals and the octofinals in the ABA’s 2016-17 National Appellate Advocacy Competition in Chicago. The national competition among more than 800 teams representing law schools throughout the U.S. began last fall.

Schools may only enter two teams in the competition, and teams compete in six regional locations to advance to the finals. The competition emphasizes oral advocacy skills through a realistic appellate advocacy experience. Competitors participate in a hypothetical appeal to the U.S. Supreme Court by writing a brief as either respondent or petitioner and then arguing the case before the mock court. 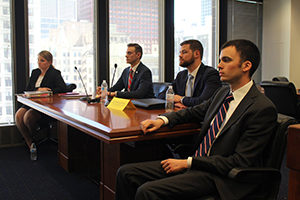 Both VLS teams advanced to the national competition after qualifying at the regional competition in Brooklyn, New York, in February, which consisted of five moot court rounds over four days. “This was a very big deal for us as it is quite difficult to advance,” Ghosh said. “The regional competition started with over 30 teams and was narrowed down to four final teams—including both Vanderbilt teams!”

Greenwell was the second-place Best Oralist in the regional competition, and the team of Greenwell, Marino and Martin received fourth place for Best Brief.