William A. Fenwick ’67, founding partner of Fenwick, dead at 83

Celebrated by his colleagues as a visionary leader, Fenwick launched the firm, then Fenwick & West, in 1972 with partner Henry West with the goal of focusing on computer technology and innovation. 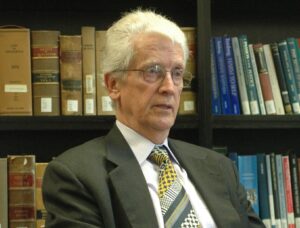 Fenwick realized that technology would democratize information and transform how law would be practiced during law school at Vanderbilt, while working the night shift in a computer operations center to support his young family. After law school, he moved to New York to join Cleary Gottlieb as an associate, where he pushed the partners to modernize. “When I got there, they had nothing but manual and electric typewriters,” he later recalled.

With West and two other partners, Fenwick launched a practice that would partner with the innovators behind new technologies to reshape business, economy and society. As managing partner, he helped steer the firm through early phases of growth. For a time, the partners shared a single office, swapping out nameplates and diplomas on the wall, depending on who was using it for clients.

In 1976, Fenwick met with the young founders Steve Jobs and Steve Wozniak to incorporate Apple Computer. Working with Apple, he developed what became the first shrink-wrap license.

“Bill was a visionary and a true giant of the legal profession. As a junior lawyer, I was fortunate to work for Bill; as a junior dean, I was fortunate to work with Bill in his role as a member of the law school’s Board of Advisors. In both contexts, I learned so much from Bill, and I will always be grateful for his support and generosity,” said Chris Guthrie, dean and John Wade-Kent Syverud Professor of Law.

Fenwick’s leadership was deeply informed by his personal experiences. He worked hard his entire life, rising from humble beginnings as the son of an itinerant sharecropper in western Kentucky, to become the first in his family to attend college and then to earn a law degree at Vanderbilt.

He was also a champion of civil rights, diversity and inclusion, beginning in his undergraduate days as student body president at Southern Illinois University, where he took on then-controversial issues, including supporting student involvement in racial integration initiatives and investigating allegations of mistreatment of student athletes.

Fenwick’s convictions carried through the entirety of his legal career. He believed in an egalitarian culture that upheld the highest standards of mutual respect and cultivated an environment at his firm where people had freedom to pursue their professional destinies while balancing those pursuits with responsibility to the firm as a whole.

In 2001 he received the Bernard E. Witkin Award from the California Judicial Council for his service in advising the council and the courts on the use of information technology. In 2015 he was honored with a Lifetime Achievement Award byThe American Lawyer magazine.

Fenwick remained close to the firm until the end of his life and held the title of Partner Emeritus at the time of his death, nearly 50 years after the firm’s founding.