Under the leadership of Vanderbilt Moot Court Board Chief Justice Kamron Cox ‘17, Executive Justice C.J. Donald ‘17 managed a team of third-year students who organized and ran the competition. 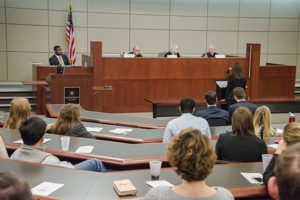 The 2016-17 Moot Court problem, Paulson v. United States, written by Executive Problem Editor Abby Moskowitz ‘17 and Associate Problem Editors Neil Greenwell ’17 and Andrew Marino ’17, raised two constitutional criminal procedure questions. The first, a Fourth Amendment question, required teams to consider the proper interpretation of Payton v. New York’s language that police officers must have “reason to believe” that the target of arrest warrant lives and is actually  present at a residence before they are legally permitted to enter the residence to arrest him. Teams were also required to determine whether Almendarez-Torres v. United States, which addresses sentencing requirements, should be overturned as unconstitutional under Due Process and the Sixth Amendment right to a jury.

The John A. Cortner Award, which goes to the winners of Vanderbilt’s annual Bass Berry & Sims Moot Court competition, honors John Cortner ’86, who served as the Moot Court Board’s chief justice. Cortner joined Bogle & Gates in Seattle after graduation, but was diagnosed with Hodgkin’s disease soon after and died within the year. His family endowed the award in 1988 in his memory.