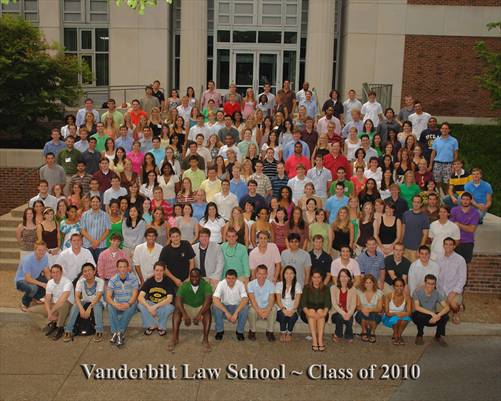 The majority of the class (56 percent) graduated from college at least one year before arriving at Vanderbilt and collectively brings a wealth of experiences in a variety of areas. Their backgrounds include business, science, military service, education, technology, entertainment, public policy, and graduate training in a number of fields. Many have worked in government, from Capitol Hill and federal agencies, to state legislatures and municipal offices across the nation. Others have worked in law: in large firms in New York, DC, Atlanta, Chicago, or San Francisco; in small firms in Tallahassee, Oklahoma City, or Seattle; for prosecutors, public defenders, or courts in various locations.

The Class of 2010 has collectively worked or studied in:

and collectively speaks these languages:

Members of the class include:

While the members of the Class of 2010 have diverse backgrounds, they share a common bond of academic excellence. As the following statistics indicate, they excelled in their undergraduate studies, posting a median college GPA of 3.74 as a group, and they show outstanding promise for law studies with a median LSAT score of 167 (95th percentile).