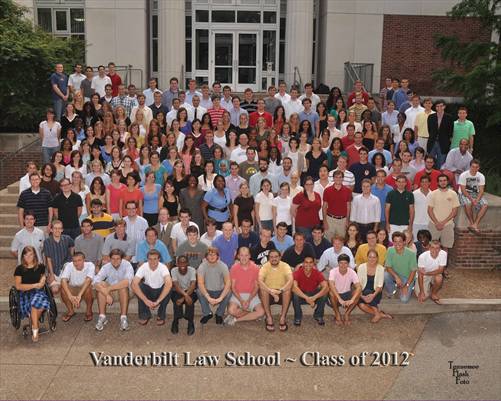 A wealth of experience

The majority of the class (60%) graduated from college at least one year before arriving at Vanderbilt and collectively brings a wealth of experience in a variety of areas. Their backgrounds include business, science, education, technology, community service, public policy, and graduate training in a number of fields.

... in Washington D.C.: Attorney General, Energy, Justice, Labor, State, Treasury, United Sates Senate, United States House of Representatives, White House. One member of the class served as Assistant Press Secretary to the First Lady, and another as US Dept Labor Assistant to the Press Secretary.

Members of the Class of 2012 have collectively worked or lived in ...

.. and have played these varsity sports ...

While the members of the Class of 2012 have diverse backgrounds, they share a common bond of academic excellence. As the following statistics indicate, they excelled in their undergraduate studies, posting a median college GPA of 3.71 as a group, and they show outstanding promise for law studies with a median LSAT score of 168 (96th percentile).

The educational environment at Vanderbilt Law is greatly enhanced by the inclusion of LL.M. degree candidates in the student body. These foreign-educated lawyers and international students come to Vanderbilt for one year of advanced study and research, taking classes and working with J.D. students in mutually beneficial relationships.

Members of the class include�