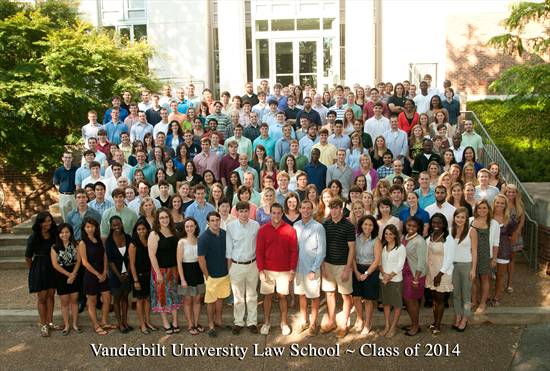 The majority of the Class of 2014 (59%) graduated college at least one year before entering VLS; 40% graduated at least two years before entering. Collectively, the members of the Class of 2014 brings a wealth of experience in a variety of areas. Their backgrounds include business, science, education, technology, service, public policy, the military, and graduate training in a number of fields.

Members of the Class of 2014 collectively...

Members of the Class of 2014 include:

A tradition of excellence

While the members of the Class of 2014 have diverse backgrounds, they share a common bond of academic excellence. As the following statistics indicate, they excelled in their undergraduate studies, posting a median undergraduate GPA of 3.73 as a group, and they show outstanding promise for law studies with a median LSAT score of 169 (97th percentile among test-takers).

The educational environment at VLS is greatly enhanced by the inclusion of LL.M. degree candidates in the student body. These forreign-educated lawyers and international students have received degrees in law from the world's finest universities before coming to Vanderbilt for one-year of advanced study and research. LL.M. students take classes with J.D. students and work together to develop mutually beneficial relationships.