Employment Summary Prior to 2011

The information below covers:

Today, prospective students are understandably concerned about the impact of the economic downturn on employment for new law graduates. The job market for new graduates of all American law schools has changed considerably since 2008. According to the National Association for Legal Career Professionals (NALP), new law graduates in 2010 faced the worst job market since the mid-1990's.

In the private sector, large law firms have reduced their summer associate programs and have hired fewer new law graduates. The national percentage of 2010 graduates who accepted jobs for which bar passage is required was the lowest percentage NALP has ever recorded � 68.4% compared to 74.7% for 2008 graduates. The 2010 percentage of those employed who obtained jobs in private practice (50.9%) was five percentage points lower than 2009.

Although salaries are generally much lower than in the private sector, many law graduates seek public service positions for their intangible rewards. Public service employment - including government, military, judicial clerkships, and public interest jobs - has become very competitive in the downturn, not only because contraction in the private sector means more new law graduates seeking public service employment, but also because government and public interest employers have reduced hiring due to budget cuts.

As one of the nation's top law schools, Vanderbilt entered the downturn in a strong position in the legal marketplace. Many different employers and a global network of devoted alumni seek to hire Vanderbilt graduates.We have taken several steps in response to the uncertain employment environment by stepping up our outreach to legal employers and alumni nationwide and expanding our Career Services staff and the resources available to help students secure employment. In addition, we have expanded the array of summer and semester opportunities for students to gain practical legal experience through externships and public interest stipends. A formal workshop series and an alumni mentoring program have also been added.

To provide a sense of how Vanderbilt graduates have fared in this rapidly changing legal job market, the following compares NALP data describing 2010 law graduates nationally to the Vanderbilt Law Class of 2010 as of February, 2011:

The Career Services Brochure provides a complete list of Class of 2010 employers and locations, pages 16 - 18.

New law graduates' employment locations reflect a school's geographic “footprint.” Schools with many graduates taking employment in-state tend to have smaller footprints as measured by the total number of states where graduating students take employment, and schools with relatively few graduates staying in-state have larger footprints reflecting wider dispersion. The following graph illustrates that the percentage of new graduates remaining in-state is generally lower for schools from which new graduates disperse widely across many states. 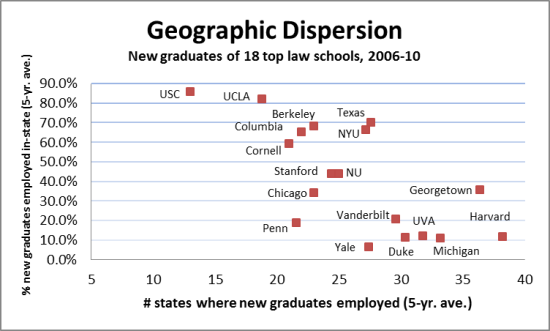 Calculations based on ABA-LSAC Official Guide data, 2008 through 2012 editions

These data describe classes graduating 2006 through 2010

On close inspection, the graph also suggests that the schools with high percentages of new graduates remaining in-state are located in large legal employment markets. Among these eighteen selected schools, the seven schools with the highest percentages of new graduates employed in-state (59.0% or greater) are Berkeley, Columbia, Cornell, NYU, Texas, UCLA, and USC. These schools are located in New York, California, and Texas, the states ranked 1, 2, and 4 respectively by the number of jobs taken by new graduates in 2010 per NALP. These seven schools' average number of states where new graduates took employment ranged from 13 to 27 with a median of 23.

In contrast, the seven schools with the lowest percentages of graduates employed in-state (20.8% or less) are located in states with smaller employment markets for new graduates. Those seven schools are Duke (North Carolina), Harvard (Massachusetts), Michigan (Michigan), Penn (Pennsylvania), Vanderbilt (Tennessee), UVA (Virginia), and Yale (Connecticut). The average number of states where new graduates of these schools took employment ranged from 22 to 38 with a median of 30. Despite this greater geographic dispersion, all seven schools in this group identified New York as the state bar examination taken by the largest number of their 2010 graduates (ABA -LSAC Official Guide, 2012 Edition).

Vanderbilt is a small school with an expansive reach; our graduates traditionally have chosen employment in a wide variety of locations, and legal employers across the nation are familiar with the qualities of Vanderbilt graduates. Rather than being heavily dependent on one or two employment markets, Vanderbilt graduates most often disperse widely across nine major cities � Atlanta, Chicago, Dallas, Houston, Los Angeles, Nashville, New York, San Francisco, and Washington, DC. � and to many other locations across the nation and around the world.

As illustrated by the NALP salary information below, salaries vary by type of employment. Public interest positions, most in legal services organizations or public defenders, are typically low, while private practice salaries are typically high. Since 2008, new law graduates have experienced the greatest changes in hiring among large firms.

To assist new graduates during the downturn, VLS launched the Public Service Initiative (PSI) in 2009, providing stipends to new graduates who secure legal internships in public service or with non-profit advocacy organizations. For the VLS Class of 2010, 42 graduates took legal internships at graduation with the program's support. Nine months later, about half had secured full-time legal employment in their desired location:

New law graduates' salaries vary by location, as does the cost-of-living, but the two do not always go hand-in-hand. Suppose two new graduates take jobs in large firms that pay $160,000, one in Washington, DC, the other in New York. Although these might appear to be equal outcomes, a $160,000 salary in Washington, DC, offers about 54.7 % more buying power than the identical salary in New York due to the relative cost-of-living:

NALP Buying Power Index Class of 2010: How much buying power did salaries offer? for each of 70 American cities.

A 2011 National Jurist study shows that “where you work and what debt payment option you choose could significantly impact how much disposable income you will have as a recent graduate.” To determine standard of living, the study used median private practice starting salaries, average debt payments, estimated federal and state taxes, and cost of living adjustments. The study then ranked American law schools by the resulting cost of living adjusted incomes of their graduates. Vanderbilt ranked third in the nation and was the highest-ranked private law school.