Arjun Singh Sethi is a community activist, civil rights lawyer, and writer based in Washington, D.C. He works closely with Muslim, Arab, South Asian, and Sikh communities and is an expert in policing, the war on terror, and racial and religious profiling. He also advises foundations and nonprofits on rapid-response organizing, advocacy campaigns, and public policy. Sethi is particularly active on domestic and international surveillance issues and pre-arrest police civilian encounters, including consensual stops, predictive policing, location tracking, biometric data collection and countering violent extremist programs.
Sethi's work has appeared in numerous national outlets, including CNN, The Guardian, Politico Magazine, USA Today, and The Washington Post, and he has been widely quoted in print, radio and television, including by The New York Times, The Independent, BBC World Radio, and NPR. In the wake of the 2016 presidential election, Sethi traveled the country and met with a diversity of people and documented the hate they experienced in connection with the election. In his book, American Hate: Survivors Speak Out, survivors tell their stories in their own words.
Sethi presently serves as co-chair of the American Bar Association's National Committee on Homeland Security, Terrorism, and Treatment of Enemy Combatants and has served as a legal observer across the world. He began his career as a government affairs and litigation associate at the international law firm of Covington & Burling in Washington, D.C., where he represented victims of domestic violence, asylum-seekers, national security detainees, and criminal defendants on death row. Sethi is a graduate of New York University Law School and the Edmund A. Walsh School of Foreign Service at Georgetown University. 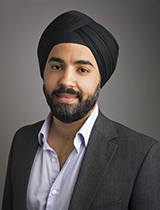