Daniel Sharfstein’s scholarship focuses on the legal history of race and citizenship in the United States. He received a Guggenheim Fellowship to research his 2017 book on post-Reconstruction America, Thunder in the Mountains: Chief Joseph, Oliver Otis Howard and the Nez Perce War, which was a Montana Book Award Honor Book and Southern Book Award finalist. His first book, The Invisible Line: Three American Families and the Secret Journey from Black to White, won the 2012 J. Anthony Lukas Book Prize for excellence in non-fiction as well as the Law & Society Association’s 2012 James Willard Hurst Jr. Prize for socio-legal history, the William Nelson Cromwell Book Prize from the American Society for Legal History, and the Chancellor’s Award for Research from Vanderbilt. His article, “Atrocity, Entitlement, and Personhood in Property,” won the Association of American Law Schools 2011 Scholarly Papers Competition. His writing has appeared in the Yale Law Journal, Virginia Law Review, Minnesota Law Review, New York Times, Slate and Legal Affairs. For his research on civil rights and the color line in the American South, Professor Sharfstein was awarded an Alphonse Fletcher Sr. fellowship and a National Endowment for the Humanities fellowship, and he was the inaugural recipient of the Raoul Berger-Mark DeWolfe Howe Visiting Fellowship in Legal History at Harvard Law School. He has twice won the Law School’s Hall-Hartman Outstanding Professor Award. A graduate of Harvard College and Yale Law School, he was a law clerk for Judge Dorothy W. Nelson of the U.S. Court of Appeals for the Ninth Circuit and for Judge Rya W. Zobel of the U.S. District Court for the District of Massachusetts. He was also an associate at Strumwasser & Woocher, a public interest law firm in Santa Monica, California. Prior to law school, he worked as a journalist in West Africa and Southern California. Before joining Vanderbilt’s law faculty in fall 2007, he was a Samuel I. Golieb Fellow in Legal History at New York University School of Law. Professor Sharfstein holds a secondary appointment in Vanderbilt University's College of Arts and Science as a professor of history. He was in the inaugural cohort of Vanderbilt University Chancellor Faculty Fellows. 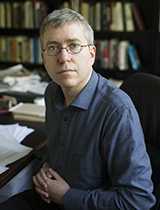