Edmund Sauer's practice at Bradley in Nashville focuses on handling federal and state appeals throughout the country. Early in his legal career, Professor Sauer clerked for Judges Jane B. Stranch and Boyce F. Martin Jr., both of the U.S. Court of Appeals for the Sixth Circuit. Before joining Bradley, Sauer was an appellate lawyer at Mayer Brown in Washington, D.C. He also served as a deputy to Kentucky Gov. Steven L. Beshear, representing the governor in federal and state courts and helping coordinate executive-branch litigation. Before law school, Sauer earned a master’s degree at Queen’s University in Belfast, Northern Ireland, as a Fulbright Scholar and a Truman Scholar. He currently chairs the Tennessee Bar Association’s Appellate Practice Section and is a fellow of the American Bar Foundation. 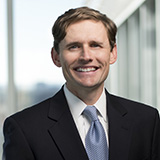