Ed Cheng's research focuses on scientific and expert evidence, and the interaction between law and statistics. Professor Cheng is a coauthor of Modern Scientific Evidence, a five-volume treatise that is updated annually, and he is the host of Excited Utterance, a podcast focusing on scholarship in evidence and proof. His articles, in which he explores evidence law from an empirical and statistical perspective, have been published in the Journal of Legal Studies, Yale Law Journal, and Stanford Law Review, among other prestigious law journals. He holds a J.D. from Harvard Law School and a Ph.D. in statistics from Columbia University. Professor Cheng teaches Evidence, Torts, and a seminar on Scientific Evidence, and is a seven-time winner of the Hall-Hartman Outstanding Professor Award for excellence in teaching. He was also selected by the graduating classes of 2013 and 2017 to be their commencement speaker. 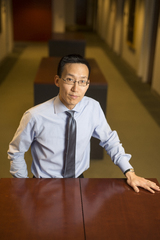